The Wolverine game was a bit of a surprise to me.  It's a movie tie-in, so my immediate want factor drops by two fold.  But upon viewing the demo by a developer, I knew this wasn't your ordinary movie tie-in.  In fact, this is Raven Software's "vision of the character" with a tie-in to the movie license.  The person giving the demo said - "This is the Wolverine fans always wanted." 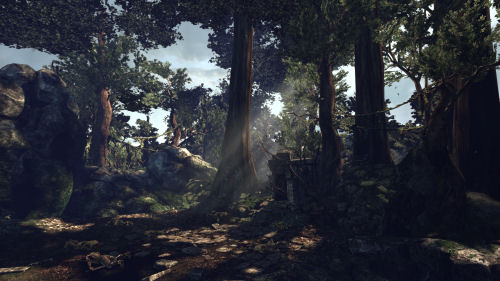 An example of the Jungle Level

The game is brutal, like... really friggin brutal.  Within the first five minutes of the demo I had lopped off three heads, six limbs, and cut a guy in half.  I took shotgun blasts at close range and watch as pieces of Wolverine flew off.  I jumped on a helicopter, yanked the pilot out, and stuck his head into the rotating blades.  Yeah, this one isn't going anywhere near a Teen rating.

I hate to make the God of War comparison here, but that's exactly how this game seems to play out.  That's not a bad thing, I just wanted to set some expectations.  You'll kill dudes, kill some more dudes, take down a chopper or two, and then level up.  You'll learn and unlock abilities, and you'll earn brutal attacks.  There seems to be a great variety of missions as well, not just point A to point B style stuff.  One missions had Wolverine decked out in his classic outfit in a tunnel being flooded.  He leapt from truck to truck taking out bad guys, all while a wall of water followed close behind.

Visually the game is gorgeous and really seems to utilize next-gen hardware.  The demo level took place in a jungle, with huge expansive environments and no loading times whatsoever.  One caveat though is, the path felt very linear despite the gigantic regions to view.  Controls seemed to work well, and I never felt like I was fighting the camera.  It was easy enough to pull off combos and special moves, and in no time I was lopping off limbs like a pro.

Like I said, this game was a pleasant surprise.  It won't win any awards for most original title or anything like that, but it's good mindless fun with pretty visuals and lots of bloody action.  Look for this game to release around the same time as the X-Men: Origins movie this May.