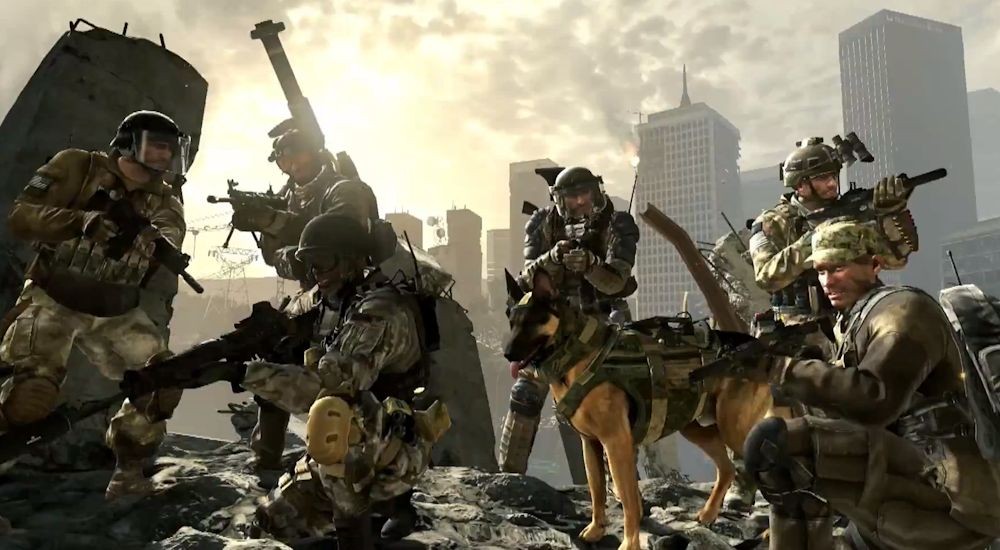 The real draw as far as co-op is concerned is the new Extinction mode. This survival game type, similar to Gears of War's Horde mode, is unlocked after completing the first campaign level, or reaching rank 5 in multiplayer. Abandoning the zombie mode of Treyarch's offerings, Infinity Ward went with an alien invasion instead. I like the choice, since zombies are overdone at the moment, and the feel is quite different. Up to four players can work together in Extinction mode, and you will absolutely need a full group, because these alien invaders are quite a challenge.

There is only one map in Ghosts, as yet, for Extinction mode. But it's a good one. A Midwestern town has been overrun by the appearance of underground alien tendrils, and our heroes are tasked with hauling a drill around from one nest of them to the next. While the drill does damage to the tendrils, players must defend, earning money for each kill. These shared funds can be used to purchase ammo drops, new weapons, turrets, and all sorts of other gadgetry. As you wipe the aliens out, you are awarded skill points, which can be spent to upgrade your abilities for the rest of the match. This dual reward system is a nice incentive, allowing for interesting decisions, both as a group and as an individual. One thing that makes Extinction stand out from other survival modes is the sense of narrative. Players can roam freely throughout the map, choosing the order of which nests to clear. Some are in wide open areas, others more easily defended. A few require air support to clear out, which shifts the focus to eliminating aliens with ranged attacks, who ignore soldiers in favor of shooting down helicopters. Even though there is only the single map, there is quite a lot of replayability. You will want to come back often, especially since you can gain ranks in Extinction mode (separate from multiplayer) which unlock different classes, additional weapons, and other goodies.

Fans of split-screen multiplayer, co-op or otherwise, will be disappointed to learn that only two-player split screen is supported, across all of Ghosts' game modes. Previous games allowed four player local co-op, but this is no longer the case. Likely, this is a performance issue. Ghosts looks incredible, even on current gen systems, but the price paid for the gorgeous graphics is the loss of P3 and P4. Online vs. bots supports six players, up to two per console. Extinction tops out at four online, up to two local. Combo co-op is supported, and on Xbox 360 does not require Gold as long as the second player uses a Guest login. I cannot verify the requirements for other systems, but perhaps the next-gen versions of Ghosts will support four players locally.

Extinction is easily the highlight of Call of Duty: Ghosts. The pace of the fighting is frantic, the perks for leveling are compelling, and the open nature of the map encourages teamwork and planning. The campaign is more hit than miss, though the lack of co-op is disappointing, as is the downgrade from four player local to a mere two. Ghosts is an enjoyable experience, but it's clear that the campaign and even Extinction mode, good as they may be, aren't the focus of the series. Maybe this will sometime change, but as long as people still keep buying them, Call of Duty games will likely skew towards competitive multiplayer. Call of Duty: Ghosts isn't a bad game, by any means, but it is a bit light content-wise to keep fans of co-op totally happy.

The Co-Optimus review of Call of Duty: Ghosts is based on the Xbox 360 version of the game.