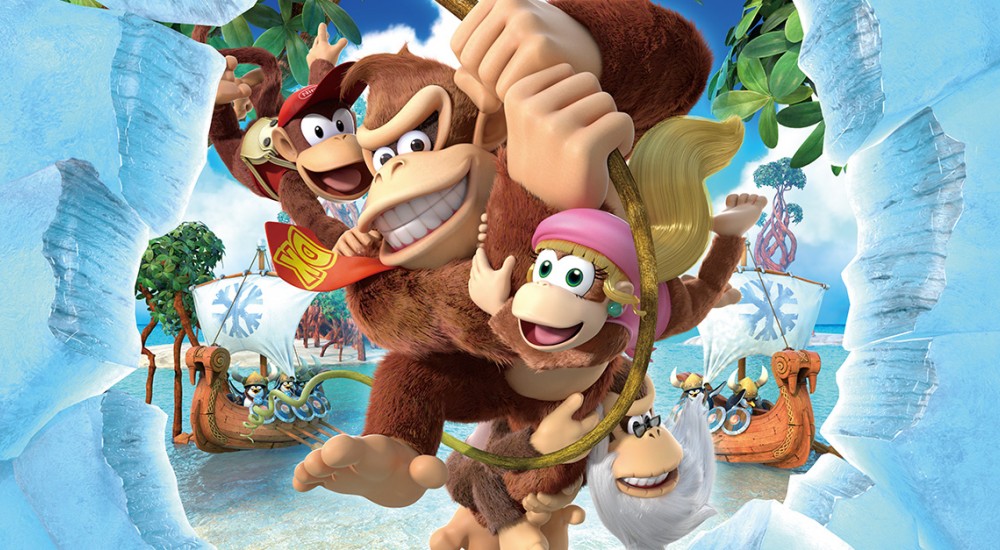 Nintendo's library of first party titles have been trickling in for over a year now, and we've had some great experiences with them. Despite the number of delays their upcoming title, Donkey Kong Country: Tropical Freeze proves that Nintendo still has it in them to produce high quality games amongst their peers success. This game is indeed a blast in a single-player experience, but it's real charm comes when played in a two-player, local co-op session. You may be familiar with the formula of a Donkey Kong Country titles, but luckily for us all, Tropical Freeze will satisfy most with a polished side-scrolling experience that will keep us wanting more.

The premise of the game doesn't stem away from the basic formula of any normal DK game: some bad guys show up, take over DK Island, and DK & crew must go on a quest to kick them out of their home. Simple enough, right? The enemy this time aren't the Kremlings and King K. Rool, but the Viking-esq tribe of Snowmads. It's interesting to note that when you play the first few levels of the game, there is almost no ice or frost to be seen, as the opening cinematic shows otherwise. Regardless, the game's hysterical characters and rich environments work perfectly with one another to make the atmosphere of this title top notch. Of all the Kong partners to choose from, Dixie is (by far) the best to bring along.
Her hair twirling can give your team the lift it almost always needs!

Tropical Freeze has Donkey Kong (the main player) travel across levels and reach the end of the stage. Various barrels with initials will sometimes be encountered, where players may free a corresponding Kong member to join up with DK; Diddy Kong, Dixie Kong, and Cranky Kong. They each possess their own unique, platforming abilities to aid DK, helping him complete the stages in a much easier fashion. Diddy Kong offers his trademark jetpack to allow DK to hover horizontally for a short distance. Dixie Kong gives DK a small horizontal hover, followed by a decent vertical uplift using her helicopter hair. Finally, Cranky Kong grants DK almost identical powers to that of Scrooge McDuck from Capcom's DuckTales, utilizing his spring-like cane to propel the pair high into the air (though a platform is needed to perform this). Each of these Kongs' powers has their upsides and downsides to them, but I found that Dixie Kongs' was, by far, the most useful of the three. While Diddy's is a watered down version of Dixie's (he doesn't have that added uplift to help with platforming), Cranky's is all but useless in many stages of the game. Pitfalls are very abundant in some levels, some even encompass the entirety of a stage. Without some ground or an enemy's head to bounce off of, Cranky is little more than a distraction on DK's back. These abilities help to gather the game’s collectibles; bananas (100 are needed to gain an extra life), balloons (give 1-extra life each), yellow coins (used at Funky Kong's shop as currency) and collectible items are scattered along the platforms or hidden from plain sight. Using each character's abilities to collect or uncover these items sometimes depends on the pairing's composition. For instance, a ledge might be too high for Diddy's jetpack to help DK reach, so Cranky might be the better partner. Because of this, I was a little disappointed to learn that players must ALWAYS have DK in the combinations and couldn't swap him out for other character combos, like a Diddy/Dixie team. DK is mainly there for two reasons:

Still, this is a minor hindrance in the grand scheme of things (it is DK's game, after all). By collecting all items in a stage, they unlock tons of extras for players to enjoy, like concept art, sound tests, character models, etc. This game has a TON to offer for those completionist types or treasure hunters.