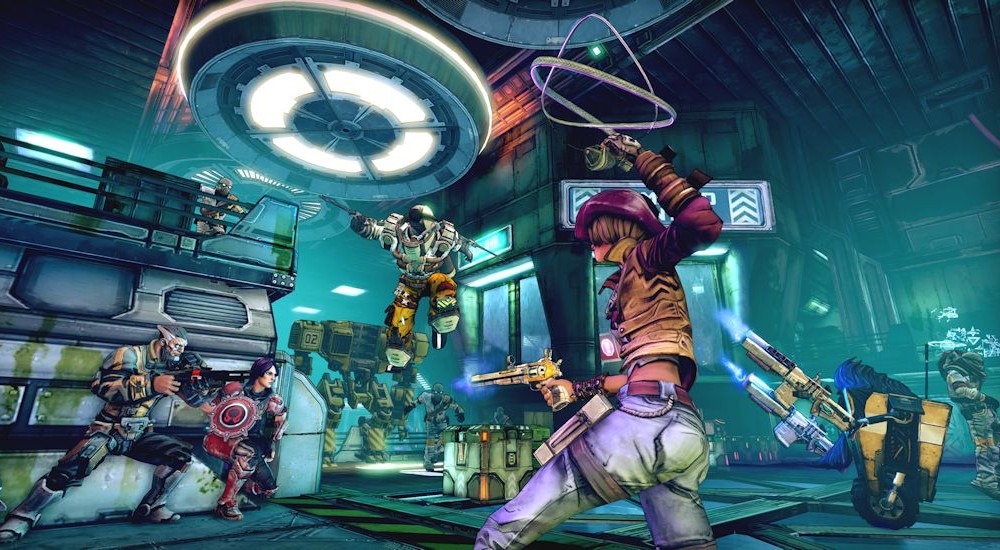 Back in 1955, Jackie Gleason made a promise to the world: "One of these days", he said, "BANG, ZOOM! Straight to the moon!" Nearly 60 years later, we're shot out of a cargo cannon from a giant space station to a fictional moon orbiting a fictional planet in a video game. We also get to fire lasers at space squid, freeze armored bugs, and butt-stomp until we regret skipping leg day. Mission accomplished, Jackie!

Borderlands: The Pre-Sequel is the third game in the main Borderlands series. The story takes place between events of Borderlands 1 and Borderlands 2, making it a prequel to the sequel, hence the name. That hyphenated title also neatly explains the gameplay experience. It's not the next big Borderlands, it's an evolved Borderlands 2 with enough extras to give it walky legs of its own. Call it Borderlands in Space, call it a super-glorified Borderlands 2 DLC, but we're going to call it a solid and satisfying game with the best co-op of the series. 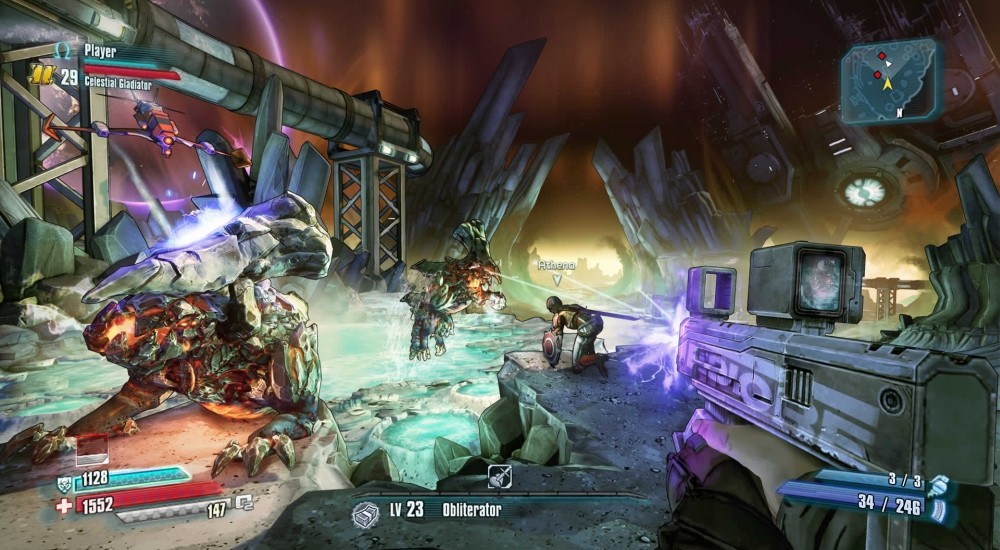 The story in Borderlands: The Pre-Sequel is framed in a flashback told by Athena, one of the new playable characters. She's being questioned by Lilith and the other heroes from the first game, and boy does she have a tale to tell, one that involves giant robot armies, AI girlfriends, a mad woman named Zarpedon, and maybe an alien that can kill you with its brain. The vault has already been opened and General Knoxx is dead, but Handsome Jack has yet to become the evil daughter-torturing madman we know him to be. This creates a comfy space to tell the story of Jack's rise to power and his subsequent fall into corruption. It also allows us to technically be the bad guys, in a way.

Now, about those new characters. Athena, Wilhelm, Nisha and Claptrap were NPCs in previous Borderlands games, but for Borderlands: The Pre-Sequel they're classed-out and ready for action. One of the first things you'll notice in Borderlands: The Pre-Sequel is that the newbies have a much wider variety of skills than the characters from previous games. It isn't as easy to drop them into neat little categories, such as Roland as a soldier or Salvador as a guy who really really likes guns. Instead, you get four characters whose skill trees allow tweaking to suit your playing style. You're never locked into one particular battle strategy or weapon type. As a sample experiment, let's take the kill-happy Wilhelm and make him a little more team friendly. Borderlands: The Pre-Sequel is packed with abilities that boost other players, which is why we were all "the best co-op of the series" up above. Wilhelm has two flying drones he uses in battle: one that heals (Saint) and one that attacks (Wolf). Saint only heals Wilhelm, but there are abilities you can activate that buff your teammates' shields or create health regen zones everyone can use when Saint leaves play. You still get the bulk of the benefits no matter what you do, but suddenly the guy with a death piston for an arm is a contributing member of a team.

A nice side effect of the customizable skillsets is that ability costs have been reduced. By the time you reach level 50, you can comfortably reach terminal skills in two separate trees. You won't be able to max everything out on both of them, but it means you don't have to specialize nearly as much as in previous games.