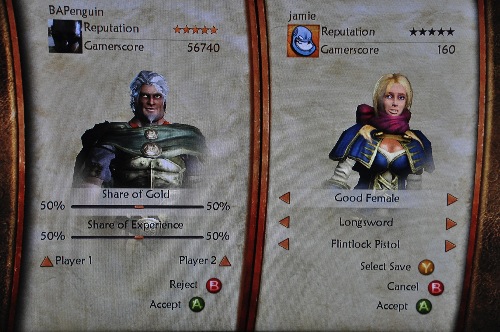 You see, whenever the main character is in a shop or a menu, the guest simply sees a screen that says "Player 1 has Paused the Game."   You've got to be kidding me.  So yeah, Player 2 is stuck there staring at that screen while his buddy is deciding on whether or not to get the lavender or forest green fluffy pants.  They could have at least let you watch the menu screens the player is cycling through.

The last nagging issue is the camera.  Players are bound to each other by the same screen in both local and online co-op.  There's no free camera control while in co-op either, instead the left bumper is used to recenter the camera behind the main player.  Numerous times you'll find players getting stuck in the environment because the characters are too far apart.  LuckilyLionhead implemented a warp henchman button, you'll become quite familiar with it.

Ok, it's not all bad.  Really it's not.  It's just we all had such high hopes for Fable 2's co-op mode.  We were promised an experience that would "change the way we play co-op."  And it's there.  Sort of.

Lets talks about the orbs.  While playing Fable 2 you'll see these orbs floating around the game world; these orbs represent your friends currently playing the game.  You'll be lolly gagging aroundBowerstone, showing off your hero muscles and all of the sudden someone will call your name.  Not your in game title, no, your gamertag .  These orbs allow you to chat in real time in proximity to each other.  It's an absolutely wonderful feature that I hope more and more games adopt.  So not only can you see stats on your friends, send your friends items, or join their game as a henchman through the orbs - but you can easily and uninhibitedly chat with them.  I've even seen this breed a new form of co-op play.

Despite the flaws in co-op, Fable 2 is still a lot of fun to play with your friends.  I even got my wife involved and she's perfectly happy with what's presented and available to her.  She doesn't even realize what she is missing from the experience, and you know what?  That's OK.  If you are looking for a deep experience, the Fable 2 co-op willdisappoint .  As a henchman there's very little vested interest in going along for the ride.  As the host, you are forced to deal with an unfriendly camera.  But if you just want some mindless fun, the co-op should hold your interest for a bit.

The Co-Op Experience: Bring a buddy along as a henchmen through the single player story. Experience and gold earned as a henchmen will carry over to your own single player game.The host player is able to set how much gold and renown their henchmen gets.The unique aspect of the online mode is it displays orbs floating around your world that represent exactly where your friends are in the game that are currently playing. Simply walk up to an orb and invite a friend in, in a completely seamless experience. Set 500 years after the original game, Fable 2 offers even more choices and features, while building on the core gameplay theme of Fable where every choice continually defines who you become, allowing you to truly live the life you choose.