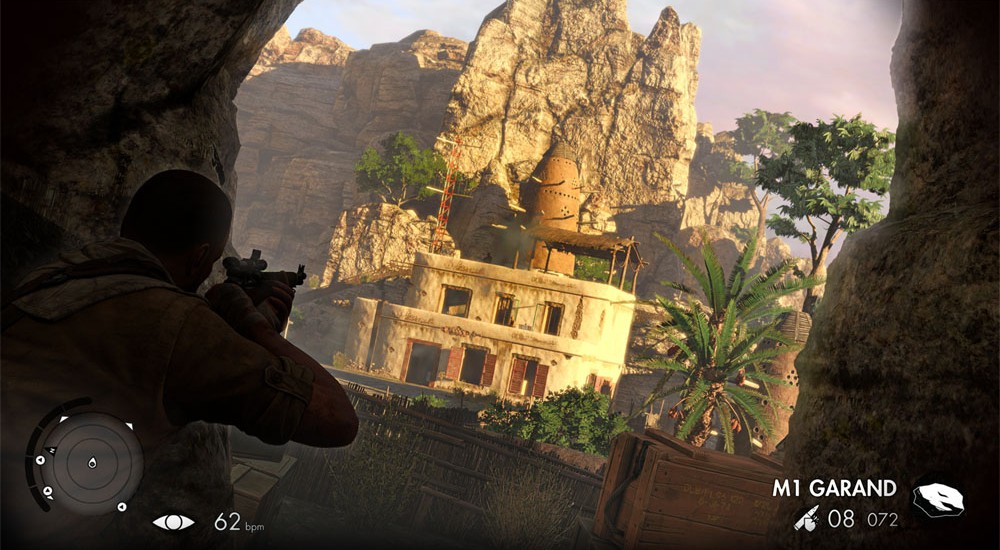 The second co-op shooter I had an interview with at PAX East 2014 was Sniper Elite 3. Co-Optimus’ own Nick Puleo is a big fan of the franchise, but I myself hadn’t had the chance to check out any of the games until now. So what did I think? Let’s take a look.

When I pick my shooters, I’m more of the twitch, run-and-gun, shotgun-to-the-face kind of player. I’m not usually the one waiting in the best sniping spot, patiently biding my time for people to poke out their heads. So it’s probably not a huge surprise that Sniper Elite 3 (henceforth SE3) wasn’t really on my radar until my interview. During my interview, however, I wondered why on earth it wasn’t since it supports not just one, but three co-op modes! Players can play the campaign in 2-player co-op, or pick from two co-op specific modes: Survivor and Overwatch. The campaign takes place over six pretty sizable levels, with the whole thing roughly estimated at around 12 hours (some will take shorter, some longer, depending on playstyle). Survivor pits players against waves of enemies Horde-style with huge tanks rolling in at the end. Overwatch, on the other hand, has a type of class dynamic, with one player controlling the Sniper and the other player controlling the Operative. For my appointment, I was shown the campaign. Though it was unfortunate that we weren’t able to play it in co-op (505 Games had originally planned to show it, but there were PS4 firmware issues that day), my rep (Robbie Cooke) did a great job explaining how the same level could be played from a co-op perspective. The map we played on was called Hellfire Pass. Each level in the campaign has a very open world feeling (the maps are three times the size of previous Sniper Elite games), but maintains a linear story. In the campaign, players are able to tag enemies (up to any number they want) to keep tabs on them. Each map has a main objective as well as some sub objectives which can be addressed in any order. When players go to certain areas of a map, they may also discover optional objectives. As I said previously, I haven’t played any other Sniper Elite games, but I was careful to ask questions about what’s different in SE3 from previous franchise installments. Robbie told me that many of the changes were tweaks directly influenced by the Sniper Elite fan community. For example, the health system in SE3 is now a “chunked” health system with health kits to restore a certain amount of bars. This was directly related to feedback from fans who didn’t like the regenerating health in previous SE games, as they felt it just encouraged people to camp out and wait for their health to come back. Another example is that the level design is much more conducive to co-op this time around - something fans emphasized they wanted. Perhaps more exciting to the hardcore is the ability to change the difficulty of the game is by taking away parts of the UI that make the game a bit easier (like additional red cross hairs in focus mode that show players where they should really be aiming).

Other changes include a more dynamic enemy AI system. The enemies will react more realistically when a bullet is fired near them: they’ll hit cover, and as more shots are fired they’ll become more aware and eventually triangulate on the shooter’s position. If an officer is left standing, he’ll reorganize the other soldiers quicker. SE3 also supports an XP system, with XP being granted for kills of various types, headshots, etc. This XP can be used to unlock loadouts and customize rifles. Some pretty great news is that the XP system is continuous across all modes of play: single-player, multiplayer, and co-op. Rebellion didn’t want to fragment their community, and I think this was a great choice on their part.

I came away from SE3 quite impressed and intrigued, which is quite a feat since I’ve been pretty jaded about shooters for a few years now. Sniper Elite 3 will hit PC on June 27th and Xbox 360, PS3, Xbox One, and PS4 on July 1st. It will support 2-player online co-op.