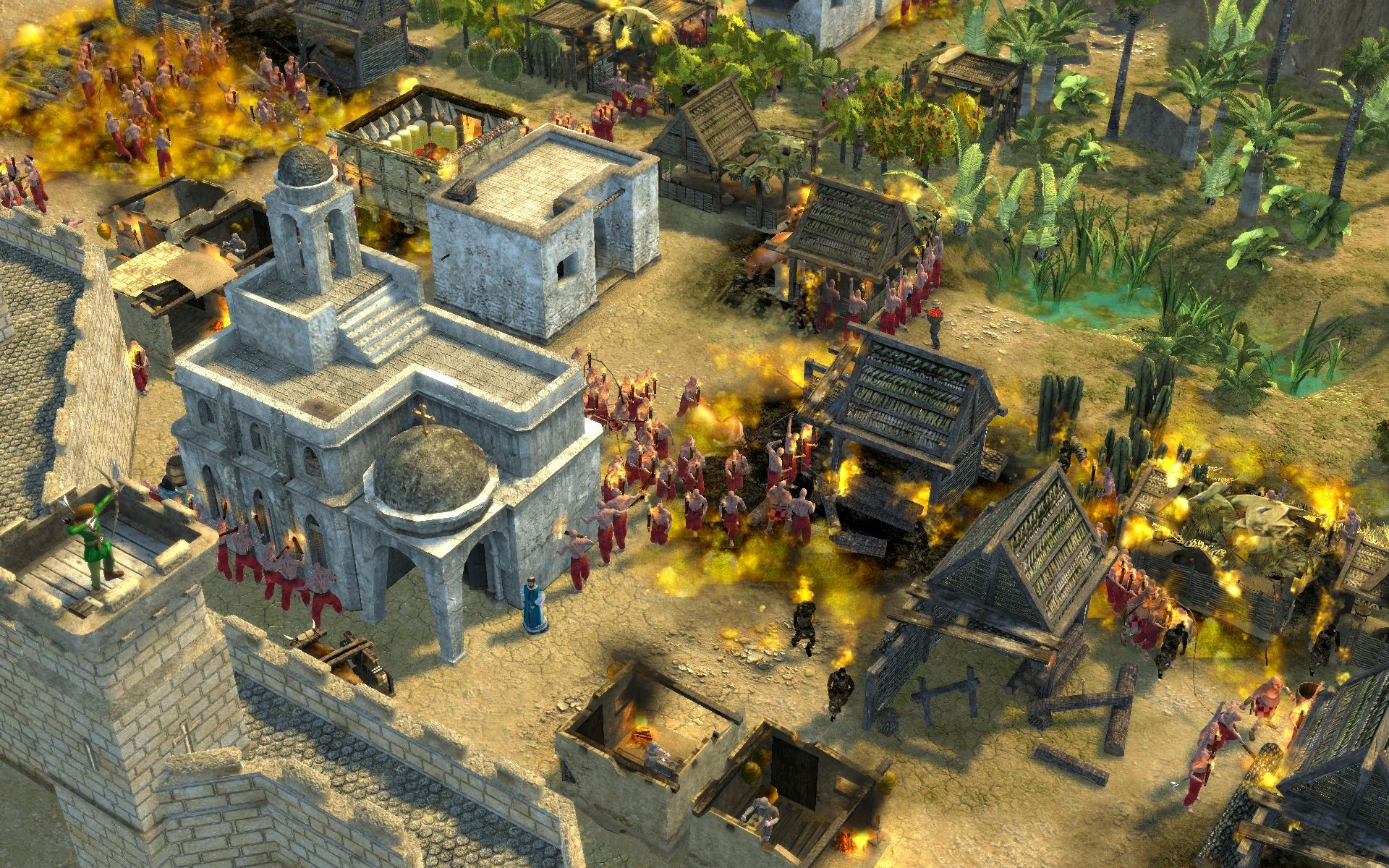 The other weekend at PAX East 2014, I also checked out the upcoming Stronghold game, Stronghold Crusader 2. Though I'm no wizard of the RTS genre (no brag-worthy APM score here), I certainly enjoy playing them on a casual level. How did I fare going hands-on with the game? Spoiler: I got my butt kicked.

We went eyes-on with Stronghold Crusader 2 at E3 last summer, and were excited about the prospect of multiple players working on the same castle in co-op (Skirmish mode). This time, I got to tackle the beast one-on-one as a gamer who has never played a Stronghold game in her life. It was daunting, to say the least. Fortunately, the dev from Firefly Studios (Nick Tannahill) was able to help me out with some of the basics while I simultaneously interviewed him about the game. The demo I played was set up to a single-player experience against the UI in a straight-up destroy-their-castle, kill-their-leader scenario. The objective was familiar enough to me, but the choices and interface were a bit overwhelming at first. I started off with a large chunk of resources and my first course of action was to start building things immediately, not go out and collect those resources like I'm used to. I needed to build a wall, some homes for my workers, and some barracks for my troops. After accomplishing this, I was advised to build a market of some sort to help with my economy and build some towers on my wall. After my towers had been built, I could place braziers on those towers to give firepower (see what I did there?) to my archers that I should also station up there.

Everything happened close to instantaneously, which was simultaneously gratifying and terrifying. When I'm first learning an RTS, I use a lot of the downtime when units and buildings are building to try to get a handle on where everything is and what everything is for. Stronghold Crusader 2 didn't give me this downtime - which I'm sure will be gratifying once I know what I'm doing. Thanks to my dev commander-in-chief, I managed to have a decent force of troops ready when the AI sent his force to my gate. As the game wore on, though, the AI picked away slowly at my troops and walls. It took advantage of my inattention (as I said, we were simultaneously conducting an interview while I was playing) and inexperience to the point where it became clear who would win this war. I conceded defeat. Despite getting thoroughly trounced, my impression of Stronghold Crusader 2 was very positive. Even from my series-inexperienced perspective, I can tell that the game has an astounding amount of depth. There was a veritable bounty of units that I could have built which all had various strengths. There were also many different types of defenses I could have employed at my castle (just for starters, there were three different sizes of towers and three different types of walls). I didn't understand it until the very end, but I found the ability to build and manage my own economy (e.g. growing/generating resources then selling those resources) very empowering and satisfying. Quite a sophisticated step up from going out and gathering them all, and being limited by the resources on the map.

The PAX East build I played had some new gameplay elements which may excite followers of the game. These included new unit abilities for three of the units (Sassanid Knight, Sergeant at Arms, and Whirling Dervish), new castle physics (e.g. castle walls now break apart realistically and come apart stone by stone when under siege), and two new pieces of siege equipment (the War Wolf and Mantlet)