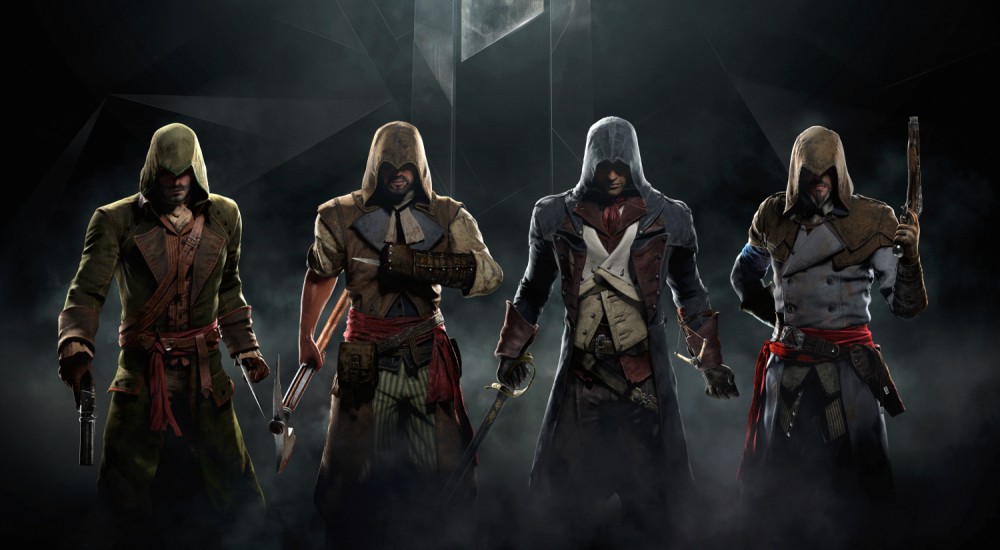 Microsoft's E3 press conference was filled with a lot of co-op game goodies. One of these was a full-on demo of the new co-op mode for the upcoming Assassin's Creed Unity. The new mode allows you and up to three friends to take on missions together within the open-world, as opposed to limited maps like the previous titles with Wolfpack.

The press conference showed off a demo of the co-op in action and Ubisoft has posted the same footage up on their YouTube channel with a little commentary from one of the game's producers. As a fair warning, it does get a bit graphic at the end showing a decapitated French nobleman's head on a pike.

This is a pretty big step forward for the AC series. The Wolfpack modes, while fun, always felt limited and never really engendered all that much cooperation. You were lucky to get paired up with another person that would hold off on murdering everything in sight for at least 5 seconds, and most matches wound up like a Benny Hill sketch by the end. What's more, the abilities you unlocked within the whole multiplayer system were mostly geared towards PvP situations, with just a few skills/abilities here and there that could help out in Wolfpack

UPDATE: Some more details of the game's co-op after the Ubisoft press conference. The co-op missions are scattered throughout the game's campaign. These missions will range from target assassination to heists and more.

From the press release info:

In addition to an epic single-player campaign, join with up to three friends online and experience the open world of 18th-century Paris. Pull ambitious heists and take part in unique narrative-driven missions designed exclusively for co-op play. Sabotage an execution. Protect an emperor. Assassinate a Templar agent. Victory won’t be easy; you and your lethal band must rely on communication, coordination, and diverse skills to accomplish your missions, then vanish into the shadows.

We expect players to play about a third of their total game time in shared experience modes. Moreover, we have conceived these missions to be played and replayed in different ways. Players will explore their environments, discover secret passages and create their own opportunities. This will have a direct impact on their gamin experience and the rewards they receive. All of these missions can be played solo and with up to three friends.

What should come as no surprise to anyone, there will also be a collector's edition of the game that will include the following bonuses:

I won't lie, despite their flaws, I've been a fan of the past two Assassin's Creed games. The newest entry looks really good and the seamless splicing of co-op into the game is a really nice feature.

Assassin's Creed Unity is currently slated for an October 28, 2014 release.