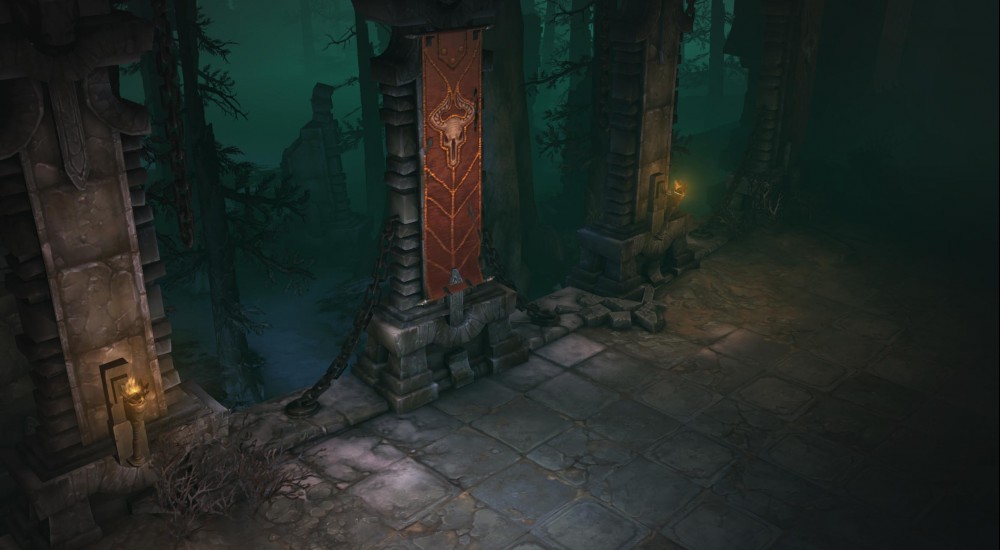 Perhaps Blizzard has decided that Diablo 3 doesn't tug the heart strings enough between bouts of creature-smashing, or maybe they just straight up hate barbarians.  Whatever the case, they announced at the recently held Blizzcon 2014 the introduction of a new zone highlighting the plight of the savage folk of Sanctuary.  Set within Act 3, Ruins of Sescheron will allow you and three other friends a chance to explore what remains of Harrogath, the barbarian city destroyed in Diablo 2: Lord of Destruction. The new zone is intended to induce a twinge of sadness into its explorers, with ruined statues and burnt-out homes hinting at the lives the city held before its destruction.  Also inducing sadness will be the myriad of ridiculously painful traps left behind by its former barbarian inhabitants, who I'm guessing were pretty big on the whole "Right to Property" thing.  Of course, no new zone would be complete without new creatures and sweet loot to filch from their lifeless corpses!  Blizzard will also be adding what I'm sure will be an awe-inspiring amount of loot to the game, as is their seasonal ritual.

Though the announcement came with a promise that loot enthusiasts will see the new content "soon", Blizzard neglected to be any more specific than that.  I'm content to wait, though, considering the creatures that are said to infest the long abandoned city.  Chief among them are the new types of swarms, which range from icy maggots to cocoons that are on fire and release flies who are, somehow, also on fire.  Oh, and I guess I should mention the giant slimy rat that spews out other, smaller slimy rats from sacs on its back.  Geugh.  Maybe I'll just stick with lopping the heads off of any skeletons that get too uppity.