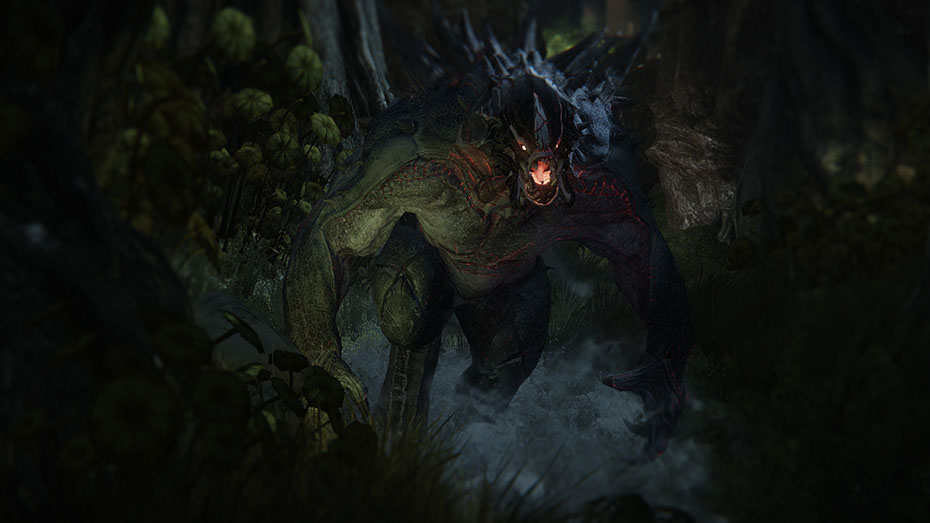 Turtle Rock Studios’ next big game, Evolve, will be released in under a month. If you have an Xbox One, maybe you had a chance to check out the open beta that ran last weekend. If you missed that, or didn’t have access to that platform, read on for our impressions of the press demo.

Locke and I are currently participating in the PC press demo for Evolve. It isn’t the release version of the game, but it’s complete enough to give us a good idea of the game. All information herein may be subject to change between now and Evolve’s release, but during the press demo this information was all as accurate as possible. We’ll also have a bit of a video preview up tomorrow for those of you who prefer to ingest your previews in video format. After completing the pretty thorough playable tutorials on both Monster and Hunters, three types of multiplayer gameplay are offered from the menu: Evacuation, Skirmish, and Custom. Solo gameplay is also supported with similar menu choices.

Evacuation can be played in PVP (4v1) or 4-player co-op. It’s a type of randomized campaign that takes place over 5 “days” (or maps). Each day is a different map/mode combination, with the four modes being Hunt, Rescue, Nest, and Defend. These modes have different objectives for both Hunters and the Monster. For example, in Rescue, the Hunters must find and evacuate five NPC survivors before the Monster kills five survivors. The Hunt, Rescue, and Nest modes share 12 maps between them while the Defend mode has 4 maps which do not overlap with the other dozen. In between each day, players get to vote between two choices of map/mode combination for the next day. Also, the outcome of the previous day will have some kind of effect into the next day (e.g. turrets added to a base to help the Hunters). The other two types of gameplay are pretty straight-forward. Skirmish cycles different maps which are not connected to each other in any way (no lasting effects from previous maps). Only the Hunt mode will be played. Custom lets players choose how they want to play. The map, mode, map effects, and gameplay rules can be chosen. It appeared that at this time only PVP was supported for Skirmish and Custom gameplay.

Whichever gameplay setting is chosen, it all boils down to pitting the Hunters against the Monster. There are three different Monsters currently: Kraken, Goliath, and Wraith. Each have their own unique sets of abilities and upgrades. Since we’re most interested in the co-op, however, we’ll be more focused on the Hunter side of things. There are four different classes of Hunters: Trapper, Assault, Medic, and Support. Within these classes, there are currently three characters. Each class has a trademark ability (e.g. all Medics get the Healing Burst ability), but the other three weapons/abilities are character specific. From the get-go, one character of each class is unlocked for players: Maggie, Hank, Val, and Markov. The other characters will need to be unlocked through a tiered XP-like system. For example, there are three Trappers currently in the game: Maggie, Griffin, and Abe. Griffin is unlocked by ranking up all of Maggie’s gear. Likewise, Abe is unlocked by ranking up all of Griffin’s gear. A character’s gear is ranked up by using their character-specific weapons and abilities. Each weapon/ability has three ranks, represented by stars. Once one star is completed for each weapon and ability for that character, the next character of that class will become unlocked. The takeaway from all of this information is that Evolve is all about variety. A potential 12 Hunters that can play across 16 maps and 4 modes (with map effects) against 3 Monsters. It has an unlock system, a separate account XP system, matchmaking, and leaderboards. The big question, however, is how does it play in co-op? The answer is a bit of a mixed bag, and it mostly comes down to the game’s current AI.

I found the AI to be a bit inconsistent. On the Monster side of things, the Monster seemed really good at some things (e.g. evading Hunters and using hit-and-run tactics), but pretty poor at others (e.g. protecting the eggs in Nest mode). Similarly, the AI for bot Hunters seemed pretty good at some things (e.g. placing the Trapper’s mobile arena on the Monster), but quite bad at others (e.g. targeting and killing the eggs in Nest mode). As the Hunter AI wants to follow players, it makes it a bit better suited for the Support and Medic roles, as opposed to the more frontline classes. As someone who likes the Support and Medic roles, that was a bit of a bummer for me. All of these factors combined make playing the game in co-op feel unbalanced. Sometimes the Monster gets outright slaughtered, while at other times the Hunter AI falters, or the Monster leads the Hunters in a wild goose chase on a Hunt map. All of these outcomes can be frustrating. Of course, things could change - either between now and release or after Evolve’s release. It’s worth mentioning that the difficulty of games can be balanced either towards the Monster or the Hunters; however, this doesn’t seem like it would solve all my frustrations across all modes and situations. Evolve feels like a strong game, but it really feels like it’s not at its full potential unless it’s being played as a 4v1 game with intelligent human players in all roles. Playing it in co-op may be fun every once in awhile, but in its current form, it may be difficult to justify picking up if the buyer never intends to play the PVP side of things.

Evolve releases on February 10th, 2015 for the PC, Xbox One, and PS4. It will support up to 4-player online co-op with players playing as Hunters. Hopefully by release (or soon after) we’ll see some improvements to the AI that’s utilized in the cooperative play.