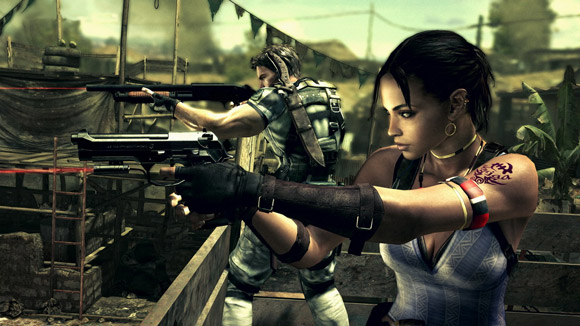 To be honest, when I first got a chance to play Resident Evil 5, I wasn’t impressed.  Nick detailed our little outing with the demo in a previous This Week in Co-Op, and no, my dislike of the game had nothing to do with the fact that I got cut in half with a chainsaw.  After putting some hours in with the full game, however, it seems that the latest Resident Evil isn’t quite so bad as first feared, but it is, in fact, quite wicked.  I would even be willing to go so far as to say that zombies/parasite infected/rage infected/creatures of the night/undead/das vampirs and co-op go together like peanut butter and jelly.

Fellow staff member, and fellow survival horror enthusiast, Mike “pheriannath” Katsufrakis and I made a deal: despite our misgivings about the game, we would both pick it up on the condition that we played it together.  No, it wasn’t a sweet case of friends sharing in the joys of co-op, more a situation of “if I have to suffer through this then so do you!”  With that positive attitude in mind, Mike (Chris) and I (Sheva, again) prepared ourselves to face down the Majini hordes. We were both surprised at how the controls seemed to have been tightened up some from the demo.  We were also surprised by our first full encounter of the Majini en masse wherein we realized that sometimes all the steroids in the world aren’t enough to prevent you from getting eaten.  In fact, all those steroids likely only makes hero Chris Redfield that much tastier, what with all of that extra muscle and bulk.  After learning that we can’t wipe out a whole village in one go, we bravely turned tail and ran for the nearest “door that separates areas via a loading screen” and thanked our lucky STARS that no zombie in the history of video games has learned to operate a turn style knob.

After successfully traversing a few more areas, we found ourselves at one of the levels you could play in the demo, the assembly and execution.  This time, though, we were better prepared.  This time, we were ready to take on the horde and the giant executioner that looked like 1980s Clive Barker was allowed to design a Silent Hill character.  This time… I died because the executioner snuck up on me, not because I charged at him in an attempt to down him with a 9mm!  Yes, progress has indeed been made since the demo.  Only then did Mike reveal to me the little tip that saved me in our next attempt: ole nasty, big ‘uns can’t climb buildings.  As we waited for air support on top of a roof that barely supported the two of us, we noted that a zombie’s worst enemy is a ledge, a knife, and a couple of guys who have spent years furiously pressing controller buttons as fast as possible.  I know this isn’t Army of Two, but the game seriously needs a high five button. It was shortly after this little victory that our game came to a screeching halt.  You see Mike and I discovered the one feature that is almost as fun as the entire game itself.  Apparently Chris and Sheva can communicate with one another in the co-op mode outside of the players talking via their headsets.  Over the span of the next 5 minutes, Mike and I proceeded to have Chris and Sheva yell at one another “come on!”, “go!”, “thanks”, and “wait!”.  No Majini were harmed, but I’m sure a few programmers’ heads exploded somewhere.

Why only 5 minutes, you might ask?  Why not more?  Well, his wife eventually told him to “come on!” and Mike regrettably had to leave biological terrorism in a troubled African nation in favor of avoiding actual terror at home.

With the absence of a fully sentient co-op partner, I was left with Resident Evil 5’s AI for a partner.  This brought with it its own degree of both horror and attempts at survival.  But that, is a story for another time…