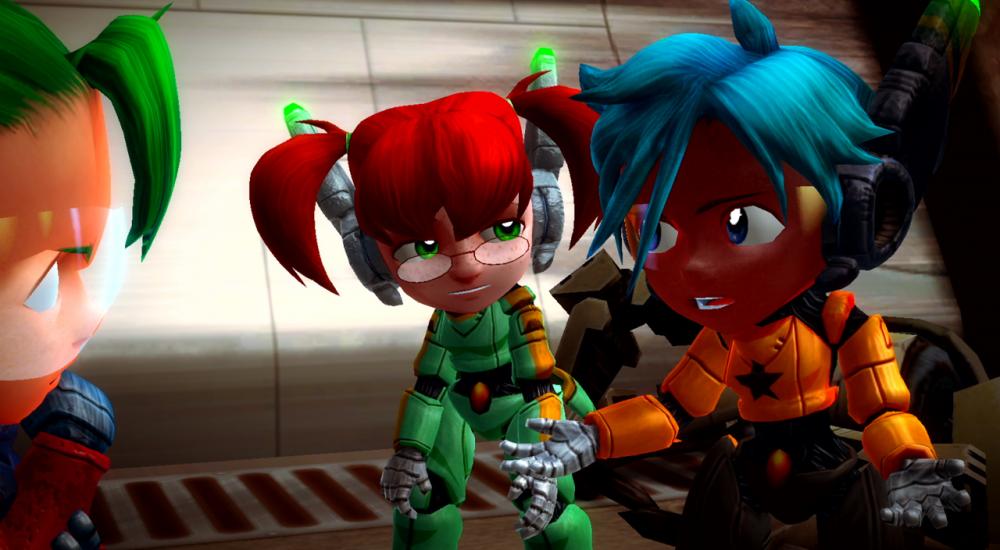 One of my all-time favorite twin-stick shooter, Assault Android Cactus, is now available on the Nintendo Switch with some improvements and a couple new features as Assault Android Cactus Plus. This re-release dropped last Friday and still supports four player couch co-op in every single mode, and also moves the "twin-stick" shooter genre into a new direction: single-stick.

When I reviewed the game back in 2015, one of the better features I enjoyed was the co-op. The 9 different playable characters all have different weapon loadouts and tactics to use when shooting foes, which works very well when playing with friends. The one thing about that, though, is that the game could be very challenging for anyone that hadn't spent a lot of time playing titles in this genre. Keeping track of enemy patterns and bullets while also trying to shoot/swap weapons can be overwhelming in a game like this where later levels guarantee the screen will be inundated with enemy projectiles. Thus, the developers at Witch Beam sought to figure out a way to make Assault Android Cactus a little more beginner friendly while also solving the issue of what to do with the Joy Cons single-stick. Enter: Aim Assist.

This new feature will automatically turn your character towards enemies so all you have to do is pull the trigger until your gun goes "click," thus leaving you to only worry about moving/dodging, and switching out weapons (which can still be a lot). The feature will always be on if you're using just one Joy Con, and (by default) will turn on if using two Joy Cons or a Pro Controller if you just leave the right stick alone for a couple seconds. The latter is a nice way to let players ease their way into things as they can spend time getting a feel for movement and the weapons while letting the Aim Assist do its thing, and then start implementing more direct control when they feel ready.

In addition to this new feature, Assault Android Cactus Plus also includes a new "Campaign+" mode for veterans of the game and those seeking new challenges. This mode remixes all 25 stages with new enemy placement and patterns, new room layouts, and advanced versions of the bosses.

Assault Android Cactus Plus is available now on the Nintendo Switch for $20 and supports four player couch co-op in all game modes.