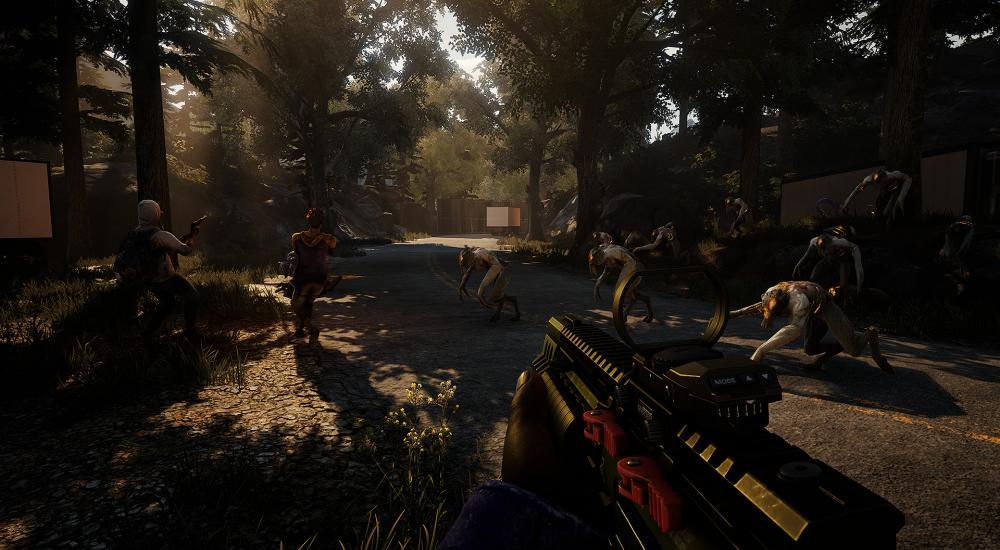 Last summer, we hopped into Holospark's FPS alien shooter Earthfall. The game was very much trying to capture that Left 4 Dead feel but with aliens instead of zombies. There were some interesting ideas, like the 3D printers for guns and setting up defenses, but it also felt like there just wasn't enough there. In the few months after its release, the devs did add some new content, so we figured we should finally hop back in to check it out.

I suppose, technically, Mike and Nick did do a stream at some point, but I can't find a record of it so therefore I believe it doesn't exist and they're just telling stories. As this is the first time Locke or I have jumped back in since all those updates, we're only counting this one. So, what did all those updates do and did they fix some of the issues we originally had? Kind of!

One of the things we said the game was lacking when we first check it out was any kind of progression to give players a reason to keep playing it. Earthfall has that now, but it's a long stretch. Many of the skill unlocks require things like "kill 2,500 drones [the basic enemies]," or "heal your teammates 250 times." Those are great long distance milestones, but don't give you much in the way of a tangible short-term progression. Yes, there's also an overall account level where you earn experience for playing, however, those perks are all about cosmetics - similar to how a Season Pass works in games like PlayerUnknown's Battlegrounds or the battle royale mode in Fortnite. If you're willing to sink in the time, then those perks might eventually pay off, but it's a lot of time to spend just trying to do one or two things.

Outside of that, there is the new Invasion mode, which is your typical wave-based survival sort of affair. This mode is a good addition as some of the better parts of the Earthfall campaign are when you have to hold up in a particular spot and use the portable barricades and turrets to survive for a bit.

So, getting close to a year later and how's Earthfall looking? Better than it was, but still in the "it's fine" category. If you're tired of shooting zombies but want that same style of game, it'd be worth checking out during a sale.