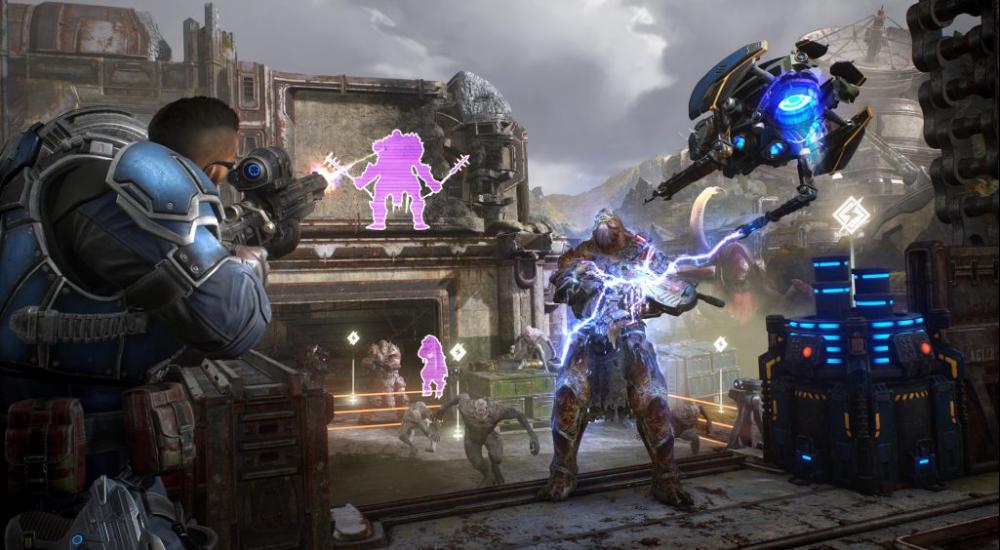 A few days ago, The Coalition lifted up the curtain on the new Horde mode for the forthcoming Gears 5. While many of the same systems from Gears of War 4 are returning (i.e., using a Fabricator to build fortifications/guns, gathering energy to power the Fabricator, equipping cards on your character), there are a few tweaks, too.

One of the key changes they're making this time around is to the characters themselves. Rather than just looking different, the character you select will have their own role within the team, passive and ultimate abilities, and default loadout. In other words, they're implementing some ideas/mechanics from "hero shooters" (such as Overwatch) into Horde. Marcus, for example, is a "Tank" whose passive ability allows him to regenerate his Ultimate ability (any shot taken by him or nearby allies while in cover is an automatic headshot) quicker by taking damage. Kait is a "Scout" whose Ultimate is to go invisible for a short period, Del is an "Engineer" that summons multiple DeeBee drones to target enemies and repair fortifications, etc. You can check out the official blog post for more information on the different characters and their abilities.

In addition to all this, the cards you equip on your character will help you further develop "builds". Those cards will level up during the course of the match and unlock new skills/abilities, and then it'll all reset for the next Horde match. These changes all sound like a good way to further evolve the franchise's Horde mode considering how many iterations of it there have been over the years in other games.

There's still one piece of information folks are still waiting to hear about, though, and that's whether the mode will support splitscreen/couch co-op play. Gears of War 4's Horde mode supported two player splitscreen on the Xbox One, but the PC version of the game didn't. One of the bigger announcements The Coalition has made about Gears 5 is that the PC version will have three player couch co-op for the campaign and the new Escape mode, so hopefully that also extends to the Horde mode. We eagerly await further details.