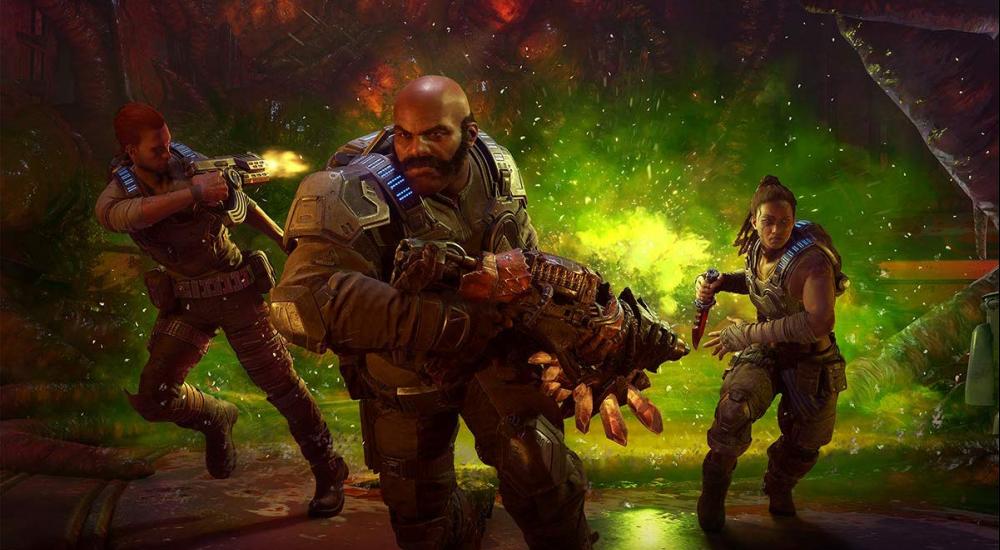 So much news, so little time! Rod Fergusson, studio head for The Coalition, took the stage during Microsoft's E3 press conference this year to talk about the newest entry in the Gears franchise, Gears 5. The last time we heard anything much about this game was during last year's E3, and it was a little surprising that not only did they have a new mode to show off and talk about, but a release date: September 10, 2019.

The new co-op mode is called "Escape" and it will support three players locally or online. It's unclear if it'll also support "Combo Co-Op" - two players on one machine playing online with a third - though it was revealed after the conference that the PC version will be getting three player splitscreen co-op for this mode. Unlike the famous "Horde Mode," where players do their best to hold out against wave of foes, "Escape" forces you to always be on the move. The three playable characters - Mac, Lahni, and Keegan - are Hivebusters, COGs that intentionally get captured by the Swarm so they get taken back to a Hive and then they bust it up (bustin' makes them feel good!) by unleashing a bio-weapon. Of course, being in the middle of an enemy base means they'll have to fight their way out while keeping ahead of the green gas (and Lil Jon?)

The Coalition had the new mode to play at E3 so there are plenty of hands-on impressions out there (sadly, we weren't able to make it this year to try it ourselves) to read through, but it sounds like success will require a lot of cooperation and coordination of the different characters' special abilities. You'll also be able to apply different modifiers to increase enemy or player health, increase damage, decrease ammo drops, and more. So, if you're looking for something outside the usual campaign co-op and Horde mode options, Escape sounds like it'll be a good addition.

Speaking of the campaign, the game will support three player local (even on PC) or online throughout. It's not entirely clear from some of what's been said/revealed thus far, but it sounds like the third player in this situation may be Jack, the support bot that can be seen flying around the other characters in some of the videos we've seen so far. On the official Microsoft page for the game, this bullet point is listed separately from the one talking about the three player campaign: "Play as Jack: Play as Jack, your personal flying support bot that can protect allies and damage enemies - perfect for players new to Gears." We'll be getting more information about the campaign in the near future, so we should know soon enough who or what the third player will control.

Finally, the Horde mode. Not much was said by Rod about the Horde mode, only that they'll have more to say/show during this year's Gamescom in August.

Gears 5 will be available on Windows 10 PC and Xbox One on September 10, 2019. If you're interested in picking up the Xbox One physical version of this game and would like to support Co-Optimus, you can head over to Amazon via this link and get it from there.