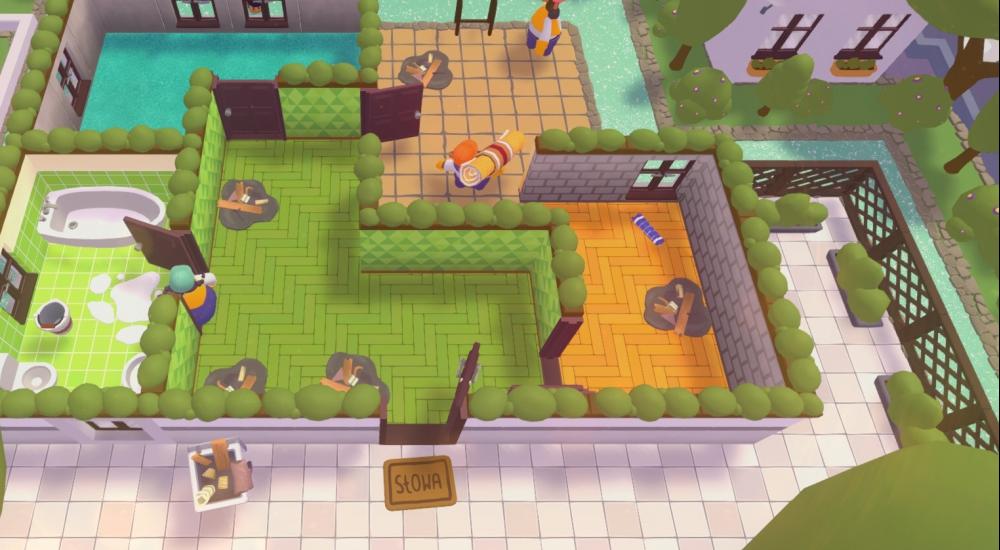 Knights of Unity released their cooperative renovation game, Tools Up!, earlier this week, so Locke and Jason decided to don their hard hats and tool belts, roll up their sleeves, and get to work under Mike's careful (?) supervision.

The quick elevator pitch on Tools Up! is that it's "the Overcooked! of house remodeling." Every level you'll have to do various tasks to fix up/renovate an apartment, such as painting the walls, pull up old carpet and lay new, and grout then tile a bathroom. These are all accomplished fairly easily with a couple of button presses and the first few levels are a quick introduction to the general gameplay flow of look at the blueprints so you know what to do/where, do it, then clean up and get out. After a few levels, things start to get interesting and you'll have different obstacles, such as all your materials floating by on a river, to overcome in addition to the challenge of getting the work done in time. It'll feel familiar if you've played any Overcooked!, and it's a lot of fun and chaotic, particularly with friends.

Locke and I checked out a couple levels in the "Party" mode before going through 8 of the campaign missions. The only difference between the two modes is that in the campaign you earn stars based on getting everything done and cleaned up within a time limit. In "Party" mode, you play the same levels as in the campaign, but now you'll earn stars based on how quickly you get it all done. It's a small distinction, but the benefit of "Party" mode is that it lets you pick any level you've completed quickly (the campaign requires you to navigate floors of an apartment building with an elevator).

Overall, Tools Up! is a lot of fun and I'll never complain about seeing more co-op games in this vein of "complete a mundane task while navigating insane challenges." The one negative I'll say about the title is that in the bits we played, it never felt like the developers gave the obstacles time to reach their full potential. We had a little bit of a struggle with the first river we encountered, but then it was gone a few levels later. In Overcooked!, a new challenge would be presented and then you'd have to deal with it increasingly more insane ways. By the time the next obstacle came along, you were ready to move on. Tools Up! challenges are here and done before you really get to see what all they could do. Hopefully there will be a sequel that expands upon this more.

Tools Up! is available now on PC, PlayStation 4, Xbox One, and Nintendo Switch. Four player couch co-op is supported in the campaign and "Party" modes.