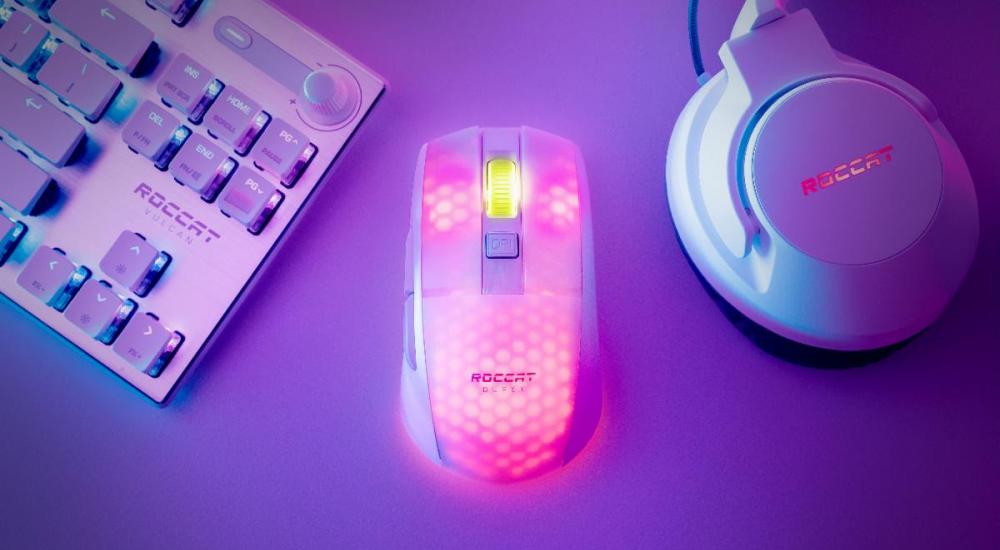 The biggest difference other than being totally wireless from the Kone XP is the number of buttons. While the Kone XP has almost 30 unique button presses, the Burst Pro Air has 8. The other difference is the weight - this mouse only weighs 81g.

The Burst Pro Air’s wireless connectivity and battery performance are managed by ROCCAT’s "Stellar Wireless technology" - the claim here is it will balance battery versus performance of the mouse somehow.  The claim is it delivers up to 100 hours of wireless performance on a single charge for uninterrupted gameplay, but I think this is highly dependent on the number of modes you use. Burst Pro Air on the right, the old Burst Pro on the left.

For instance, you have a choice between a low-latency gaming-grade 2.4GHz wireless connection or a multi-purpose Bluetooth 5.2 wireless connection. This gives you some flexibility and removes the need to carry a dongle - though it does store nicely in the base of the mouse.

Charging the Burst Pro Air with the included USB-C PhantomFlex cable is as easy as plugging in the USB header into the front of the mouse. It'll still function and after just 10 minutes of charging it should have around 5 hours of use.  10 minutes of charging took my mouse from 20% to 40%. All in all I was never able to hit the claimed "100 hours" of use, though I did not turn off the mouse at night and because of the lighting it consumed some battery while idle - though the lighting does have idle timeout options. My actual measured time was about one week of average use - which I clocked in at about 14 hours of gaming and 8-10 hours of web browsing plus idle time. If you are into the E-Sport or competitive aspect of gaming the Burst Pro Air also supports the NVIDIA Reflex Analyzer. NVIDIA G-SYNC displays with Reflex have a system latency analyzer that detects clicks coming from gaming mice and measures the time for the resulting pixels to change on the screen. When using ROCCAT’s Burst Pro Air mouse in conjunction with an NVIDIA G-SYNC display with Reflex, you can measure and improve full peripheral and end-to-end system latency. At least that's the claim - without a complex set of tools there's really no way to measure the accuracy. The list of compatible games is linked above.

Overall I never felt like the wireless mouse hindered performance at all. The freedom without a cable is great and you really aren't sacrificing anything here. The mouse even has full LED lighting capabilities and they look great. I'd recommend this mouse to anyone already in the ROCCAT ecosystem - it's a solid performer and priced competitively at $99.99 with other wireless mice.