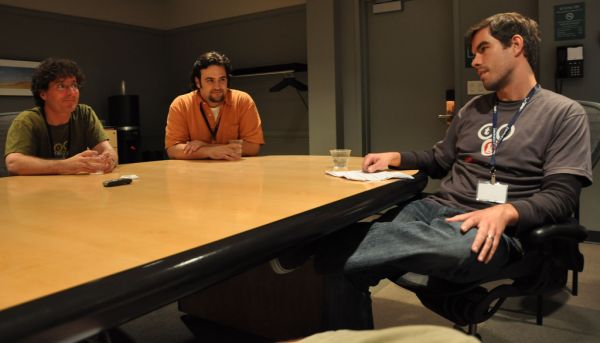 While at PAX, we had a chance to sit down not once, but TWICE with a few folks from Telltale Games to talk about their recent episodic release, Tales of Monkey Island, the lessons they've learned from previous releases, and what are some of their favorite co-op titles.  In the first interview we were joined by Dave Grossman, Design Director for Telltale; Dominic Armato, voice of "Guybrush Threepwood"; and Chris Schmidt, PR Manager.  All of them love playing and talking about games so much, we didn't want to leave anything out.  So we've included the complete audio from the interview, as well as pictures taken by Rob "mightbe" Schuster during the interview, after the break.

As mentioned earlier in the post, this is just the first of two interviews we had with Telltale.  In the second interview, which we'll post later this week, we sat down with Mark Darin, Designer/Programmer for Telltale Games and the director for Tales of Monkey Island Episode 2: The Siege of Spinner Cay.  So stay tuned to Co-Optimus for more from our trip to PAX 2009!