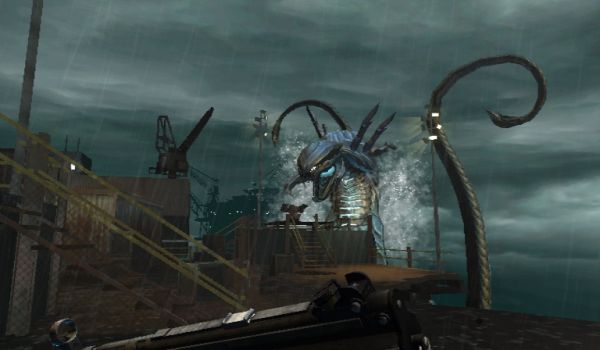 As Kat pointed out earlier in the week, The Conduit 2 is doing a lot for a sequel to a game that many considered the first succesful first-person shooter on the Wii.  Among these additions is the inclusion of a new co-op mode where up to four players will fight off waves of enemies, and is now confirmed as being playable either locally or online over the Nintendo Wi-Fi Connection.  Nick and I had a chance to see a hands-off demo of the game at E3, and while the multiplayer/co-op modes weren't being discussed (a running theme for many of our appointments, it felt like), we did walk away with some pretty favorable overall impressions of what we saw.

One of the first things we saw was character customization.  A player will be able to create his or her own Agent Michael Ford (still being voiced by Mark Sheppard, of Firefly and Battlestar Galactica fame) choosing from several different character models.  Additionally, players will be able to choose their own weapon load-out and perks/abilities.  These perks/abilities and weapons can be acquired by playing through the single player campaign, and/or purchasing them from the customization screen using the money that's acquired by playing the campaign and multiplayer.  What's really amazing about this customization is that it is persistent across single player and multiplayer; meaning that after you team up with some friends to take on hordes of enemies while being loaded up with rocket launchers and some heavy hardware, you can immediately jump back into the campaign with the same load-out.  If you decide that you want to change up your weapon set in the single player game, you won't have to go back through the customization screen to adjust as there will be a central hub in the campaign from which you will be able to choose missions and which weapons to bring along.

After that, we got to see the game in action.  The developer giving the demo showed us the first level of the game, which (by pure coincidence with regards to current events) took place on an oil rig out in the middle of the ocean.  A storm raged as Agent Ford began fighting his way through the rig, searching for his former mentor and current adversary, John Adams (who is voiced by Sheppard's father, William Morgan Sheppard). The rain effects and textures of the rig itself all looked really good for a game on the Wii, as much as I hate to use that phrase.  Actual game play seemed pretty good and standard for a FPS, with the developer ducking behind cover when needed in order to avoid enemy gun fire and popping out to down a few enemies.  He also showed off a few different weapons, including one that actually created a gravity field in front of the player that could catch enemy bullets/grenades and hurl them back at the opposing foes.  The demo ended with a boss encounter with a giant creature called, the Leviathan (as seen in the picture at the top of this post).  This was a fairly straight-forward scripted boss fight with our hero running around to different gun turrets and using them to shoot off the glowy bits to take the Leviathan into the next phase of the encounter.  As the killing blow was being landed, the screen faded out and we were teased with the line of "I don't think we've seen the last of him."

It's too bad that we couldn't see any of the Team Invasion co-op mode, but what we did get a chance to see is certainly looking pretty good.  Hopefully, the co-op mode will be just as fun and receive just as much attention as the rest of the game.