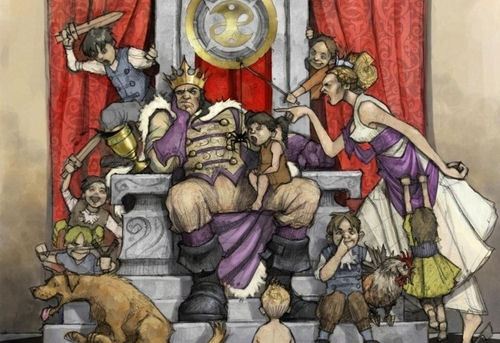 This week in Co-op Nick and Kat struggle to get their Fable III games to connect (claiming the DLC was incompatible, but that didn't seem to matter after Kat got in to her sanctuary to save and restart the game). So we get a late start to the week in co-op, but it's complete humorous banter between a Queen in her realm and a newcomer King out for the wooing. Nevermind that Kings and Queens don't particularly communicate well.

From the moment I arrived her world, I knew she was the one. Perhaps it was her voice, or her curvaceous figure, or perhaps the way she handled a sword - whatever it was I knew it wouldn’t be long before love blossomed.

We headed out with her friend Walter to gather soldiers at a fort to rally to her cause. I had a strange case of deja vu, but none the less, we pushed on. Soon we stood together atop the fort firing mortars at hollow men. Side by side we annihilated the bony creatures.

“What side do you want?” she said, already taking an interest in what I want first. This one is a keeper.

After the battle we headed out into the forest towards Bowerstone. I decided to flirt a little, first a handshake, then some fancy whistling, then I put my Patrick Swayze on and we danced under the dim moonlight.

Things started to go awry once we hit Bowerstone. After meeting with the underground resistance in the sewer she decided to tickle me. At first it seemed playful, but then she did it over and over. Then she decided it was time to dance, but SHE wanted to lead. Before I knew it, I was flying over her head. And if that didn’t emasculate me enough, she then let out the biggest belch I’ve ever heard right in my face. My dog began to growl.

But that didn’t bother me, and soon after I asked for her hand in marriage. She said yes and chose a house for us to live in...in the swamp. I’m not all that materialistic, but I’ve got a crown on my head and $250k in my pocket - lets live it up lady. Nope, a shack for us and a wedding in the center of town on some logs. I didn’t think such a gorgeous and proper princess would want a swamp wedding...but she did. To make things worse when I went in to “kiss the bride” she took control, dipped me like a daisy, and KISSED ME. Talk about emasculation.

Of course the only thing to do was to head home and consummate the marriage...on the sleeping bag in the corner of our shack.

Perhaps I should have used protection, because she popped out a kid quicker than an Angelina Jolie adoption. It had to be a magic uterus. Being two working parents we did what we had to - we hired Aunt Jemimah to watch the baby and went off on our adventures.

Well, after that she went off on an adventure, I just followed. I’m not sure what this guy had in mind when he joined my game, but my agenda is clear. Marriage, baby, achievements galore. Glory for the new queen is what I need. He has a crown, so he’ll work just fine.

First though, I have to see if this guy was really worth a damn in breeding. I decide to drag him along on a quest or two, earning more followers for my revolution. We have to clear out some of those disgusting Hollow Men from a grove. I don’t want him getting in my way, so I ask him to pick a side of the map to cover with his mortar.

“Well, I’m already on the left,” he replies, I can tell by his response he’ll be easy prey.

We head to the town of Bowerstone where I expect a speedy proposal. He decides on some romantic spiel - dancing and such along the wooded road. I admit it would have set the mood, but there is no place for romance when you’re bound to be the queen. After he leads the dance, I decide to show him I’m not one to be tossed around like some girl.

Once we reached Bowerstone it was time to meet the resistance closest to the tyrants castle. I decide to show my future followers what kind of ruler I will be for them. I grab my future husbands waist and give him the same treatment he showed me. I’m not sure what he thought of it, since I was too busy tickling and belching to show off to listen.

Ticklish men are so humiliating. We started off trying to see who would win - Obviously it was me.

After the resistance joined my cause, the proposal finally came. I, of course, wanted to keep things reasonable for now to save as much money for my kingdoms treasury as possible, so I selected a quaint shack in the middle of the swamp. No one would look for the leader of the resistance here, securing my victory at once.

But first, it was time to pro-create in case things didn’t go according to plan. I may be a rebel now, but I’m still of heroic and royal blood. This would assure my child a seat on the throne should I fail. He was taking much to long to make a decision on this matter, so I did the honors of asking the only way I knew how. After our baby arrived, I made sure to give the nanny a bit of extra gold, to keep an eye out. I had a feeling we wouldn’t be checking in for a while.