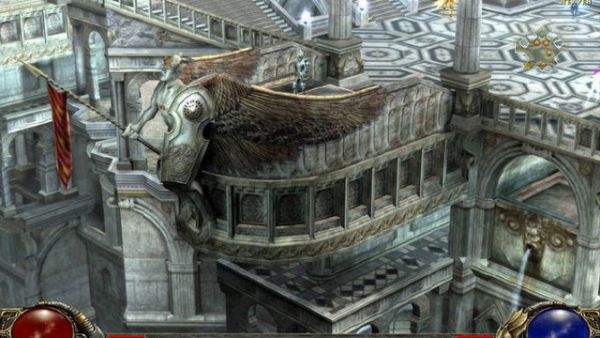 With hopes of Diablo 3 finally gracing our PCs (and sometime maybe consoles) this year - Kotaku has obtained an exclusive look at the game from a build back in 2005. The dozen or so screen shots of an early version of the game show three environments: Keep, Angelic Lands and Heaven.  It seems the player would be entering a more pristine looking area (devoid of rainbows) and might run into some familiar faces, with an appearance by Tyrael in one of the screens.

At one time I had heard that Diablo 3's story would have Hell invading Heaven, something these screens seem to led credence to.  While the exact story and details of Diablo 3 have yet to be completely revealed, from what we've seen the game as it stands today looks quite a bit different than the 2005 build.  We already know players will be exploring the world of Sanctuary - but hopefully a journey to Heaven and/or Hell isn't out of the question.

One interesting thing about these screens is how much the interface and "look" still shares with Diablo 2, despite the game moving to a 3d engine.