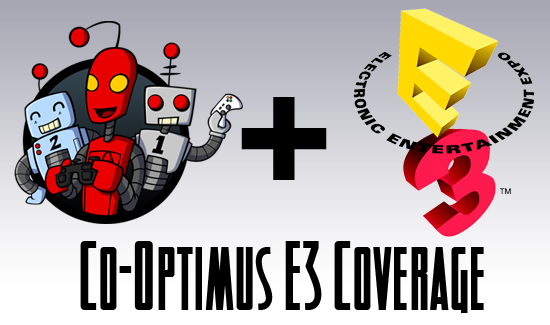 E3 2011 kicks off next week in Los Angeles, CA and Co-Optimus will be there all week to bring you the goods on all of the biggest upcoming co-op games and beyond.  Nick, Andrew and Kat will be bringing you news, pictures, video, tweets, and audio direct from the show floor all week.  To kick things off the Co-Opticrew thought they'd talk a bit about their most anticipated titles of the show.

You can always keep up with our E3 news by clicking the E3 2011 in the Popular bar above.  For now, here's what's on the schedule. Warhammer 40K: Space Marine:  Despite not knowing anything about the game’s co-op modes, and really, being unconfirmed that THQ will even talk about co-op at E3 - I really need to get my hands on the game.  Everything I’ve seen so far just looks like a blast, I love the Warhammer 40K universe, and Relic is a really solid developer.  Definitely my most anticipated to play.

Dead Island:  Zombie games are a dime a dozen lately, but it finally looks like someone is going to change things up a bit with Dead Island.  It’s not straight action, it’s not straight strategy, and it’s not straight RPG.  Instead its a mix of the three in a unique island setting.  Yes, it’s all about the beauty of nature vs the ugliness of the undead - sounds cliche but I dig it.  With four player online co-op this could be a really solid title for people that might not be up for Left 4 Dead’s twitchier style gameplay.

Serious Sam 3: BFE:  Some of the most fun I’ve ever had in co-op gaming was playing Serious Sam on a college LAN with friends.  The latest game in the series ups the ante with 16 player co-op which we’ve only seen in the recent HD remakes of the series.  Every once in a while you just need some mindless fun to have and Sam is the perfect candidate for that. Amy - I’m always intrigued by a game that looks to push the boundaries of a genre, and Amy (so far) appears to be doing just that. The downloadable survival horror co-op will be one of the first games I check out at E3, and I hope to learn some great new things about the game featuring creepy little girl Amy and her sidekick character as the survive a horror-style apocalypse.

Nintendo - For the past few years all of my “Press conference” exposure has been from afar, so this year I’m actually excited to see what comes out of the Nintendo press conference first hand. Having a new console (Project Cafe) to discuss adds to the excitement.

Silent Hill - When Nick asked me if there was anything I’d like to see that wasn’t co-op, the first thing that came to mind was “Silent Hill.” I’m a fangirl, I admit it - and to have an opportunity to see one of my favorite series at a show like E3 I am a fangirl in paradise. I’ll be delivering a Beyond co-op impression of this game, whether you like it or not.

Well, shoot.  Two of my most anticipated titles are mainly versus games with a dash of co-op.  The third can be debated on whether it really meets the co-op criteria of Co-Optimus.  I want to see where the defining line is drawn for each of these titles. Anarchy Reigns - It’s a new online beat’em up from Platinum Games, the makers of Mad World, Bayonetta, and Vanquish. All three of these titles were ridiculously over-the-top, action-packed extravaganzas.  One of them was even on the Wii!  Anarchy Reigns brings back Jack from the Mad World game, and he has plenty of crazy friends with him.  Judging by the numerous trailers, these guys are all out of bubble gum.

Twisted Metal- The Twisted Metal reboot will reportedly have an online and offline co-op campaign, along with four player split screen support.  The game’s main focus will be on 16 player online versus combat, so I’m curious to see how the co-op campaign will work.  I also want to see if the game is co-op-able with four players locally.  I played the first three Twisted Metals, but the third one was so sub-par, I’ve neglected the series for well over the last decade..  Hopefully, developer Eat Sleep Play will give us a reason to get back behind the wheel again.

Dark Souls - The spiritual successor to Demon’s Souls is my most anticipated game of E3.  As you may have read last week, I just started playing Demon’s Souls, and I’m more that impressed by the title.  I’m curious to see what changes, if any, developer From Software makes to the co-op system.  Purists may cry foul, but I’m hoping for an ability to turn off human player invasions.  Yes, it’s super exciting to vanquish a human opponent, but so many people I know won’t even try the game because they don’t want to be one-shot by some PvP savant every time they try to play with friends.  I’m hoping for a more pure co-op experience.

In total we have over 35 apointments this year to see dozens of different co-op titles.  So while these might be the games we can't wait to see, there's sure to be plenty of surprises.  Check back with us starting Monday, June 6th for our E3 coverage!

What games are you looking forward to hearing about at E3 2011?