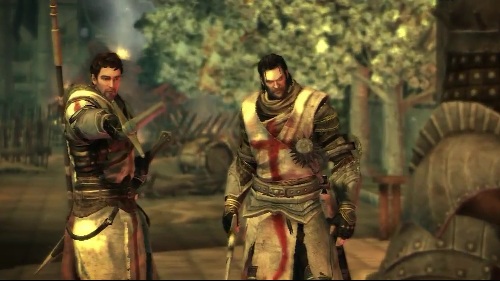 Is it just me, or is The Cursed Crusade starting to look like a pretty good game?  I know we've had our fair share of medieval heroes clad in white robes, but something about this game appeals to me... Could it be the brutal finishing moves?  The split screen or online co-op?  What about the most informative trailer, ever?  All of this sounds good, but that's not what's filling my Q-zone...  Ah, there it is.  The $40 dollar price tag.  The more I see of this game the less it looks like bargain bin fodder.  Check out the video and let us know what you think.

I do have some bad news.  The game has been delayed a few weeks.  It will now be arriving on October 25th.  Don't fret.  Let me counter that with some good news.  A demo will be available "a couple of weeks before launch."  The even better news?  The demo will support two player local co-op via split screen!  Demos are hard enough to come by, but it's very rare that they include a co-op mode.  Huzzah!

The Cursed Crusade will be available on the Xbox 360, PlayStation 3, and PC on October 25th.  The full version will support two player local co-op as well as two player online co-op.