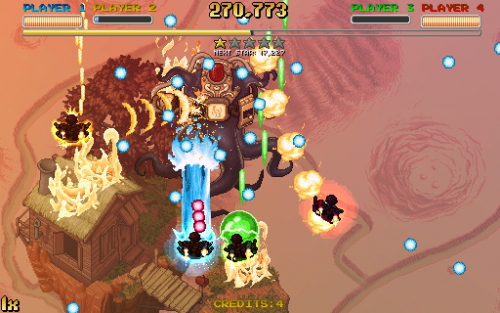 Last Saturday we brought news of an expansion to the PC 4 player 'shmup, Jamestown; a game that reenvisions the historic settlement of the "New World" in a steampunk/sci-fi setting. The expansion continues with this theme by playing off of another historical event that happened around that same time and which has been immortalized in this rhyme:

Remember, remember the fifth of November
The gunpowder, treason, and plot;
I can think of no reason
Why the gunpodwer treason
Should ever be forgot

This simple little verse holds its origins in a failed attempt by English citizens to assassinate King James I and the guys at Final Form Games decided to immortalize it in their own way. From the Steam info page:

Jamestown: Gunpowder, Treason, & Plot introduces three new ships & their pilots (including Guy Fawkes himself!), each of which brings exciting new gameplay to the award-winning co-op shoot-em-up, Jamestown: Legend Of The Lost Colony.

- “The Ghost”: deploy a copy of yourself to watch your back, while you unsheathe Excalibur itself!

- “Gunpowder”: amass 3 oversized Grenades that can be launched into the fray and detonated at will!

- “Fortune”: roll the dice with a bonus ship that can mimic any of the other seven!

With the DLC's release today, we've got three pairs of Steam codes to give away. Each pair includes one code to download the DLC itself, and one code to download the game's original soundtrack (a truly outstanding score). To be entered to win one of these sets, simply leave us a comment stating your favorite historical revolutionary figure by 5:00 pm Friday, November 11th. Three winners will be chosen at random from all submissions provided. Good luck!