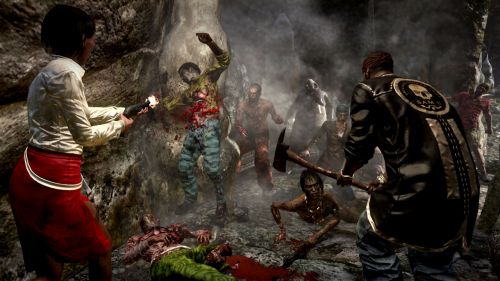 Open your pre-ordered copy of your new game and take out the scratch card.  Behold the free DLC (or access to online), everyone is a winner. Except for people who bought the game second hand; no free DLC for you (no free online access!). Even when you get a freebie, they sometimes take an age to arrive; Space Marine's Exterminatus mode, and Dead Island's Bloodbath DLC are two examples. Techland have finally announced the date for the Bloodbath - 22nd November, let's hope it does not slip again ...

Dead Island's Bloodbath add on was originally planned for release a few weeks back and is free to players who preordered the special edition of the game, everyone else will pay either 800msps or $9.99. The DLC took so long to arrive due to Techland concentrating on numerous patches to help fix their slightly unfinished game. The glitches did not stop Co-Optimus enjoying the 4 player co-op experience and gave the game the ultimate accolade of Editor's Choice.

What does the new Bloodbath DLC contain? Allow Techland to explain:

In the “Bloodbath Arena” DLC four different arenas offer new challenges that can be played alone or in coop mode. It’s a desperate fight for survival where waves after waves of unrelenting zombies attack, one more gruesome than the next! In this DLC characters can loot experience points and items and bring them over to the campaign mode. Players can show off their skills in zombie fighting with the newly implemented leaderboards. The brain wave bomb, a new exclusive weapon, tops this DLC package off.

So that is four arenas' worth of survival mode for your bucks.  I like nothing better than to take on wave after wave of the undead until they eventually overcome me and the inevitable happens.  Is there an option just to finish it all at the start of Wave 1?