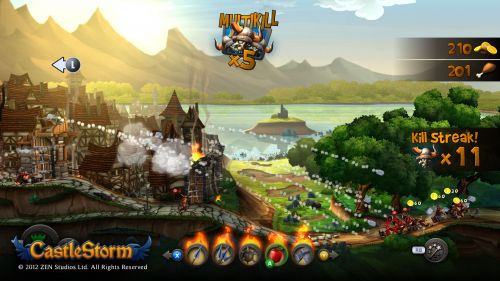 Zen Studios, famous for their Zen Pinball franchise, have announced a new game coming to Xbox Live Arcade and "other digital platforms" called CastleStorm.  The game combines elements of RTS, Tower Defense and Destruction into one package as players try to take down opposing castles and structures using projectile launchers.

CastleStorm is promising twelve unique environments, multiple paths to victory and zany weapons that remind me a bit of the Worms franchise.  We've even got flying sheep weapons to go along with the apple grenades and homing eagles.  There's also a variety of unit types to control on the ground like swordsmen, donkey riders and more.

Co-Op and versus play are support out of the box with split-screen.  In co-op, players take on a version of survival mode.

A release date and price have not been announced, but the game should be out in 2012.