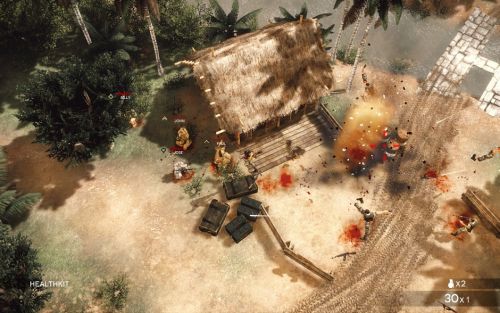 There is a certain game that hits today on PSN offering some twin-stick shooter style gameplay with co-op and a few well-known movie guys. At least one Co-Optimus staff member is super excited and, as is my understanding, has been eating more meat than usual in order to become "manly enough to handle it." However, if you're a bit leary of movie tie-in games, and looking for a game with perhaps a little more substance, then perhaps you'll be interested in the Recruits.

Recruits will place you in command of a squad of soldiers that fight their way through a series of objectives in each level with the overall goal of just making it off the battlefield alive. These objectives may entail rescuing hostages, or blowing up enemy encampments, but they also promise to make you face some difficult choices - the outcomes of which can have an impact on your squad's morale. Squad members can be upgraded and specialized to allow a more tactical approach to everything. You won't be going it alone, though, as you'll be able to bring along 3 of your friends through online co-op play. The full list of features and a gameplay video are below.

Simple, Fun Controls:
- Let the mouse do most of the work. Using either mouse click or WADS to control the squad, right click for your basic weapons and middle click for specials, you have all the fire power you need at your finger tips.

Variety of Levels:
- From Jungle to Urban, to Snow to Desert. Many war zone will be covered. Destructible objects and interactive elements immerse the player in their environment.

Level Up System:
- Level up with ranks, starting off as a low class soldier and working your way up through to Captain and General.

Group Morale:
- Having a morale system for traumatic events in the game. The more you can help people in missions the more points you gain and the more effective your team is, the more traumatic events you cause or witness and your team start to feel emotionally affected, hindering your performance and risking your chances to survive.

Command your Team:
- Having the ability to give basic commands to your team members such as Defend, Attack, Search and ReGroup allows you to tackle all situations.

Special Abilities and Upgrades:
- Gain points to level up and earn special abilities and upgrades such as napalm strikes, reinforcements, accuracy upgrades, and much more.

Single Player and Co-Op Multiplayer modes:
- A single-player mode puts the player straight into the action and fighting for their country. A multiplayer Co-Op mode puts you and your friends into the war together with survival mode and the ability to replay single player missions.

As if that wasn't enough, they also have vehicles for you to tool around in. I'm kind of reminded of the old classic, Ikari Warriors - if Ikari Warriors had RPG elements and potential "war is hell" overtones. I spoke briefly with the game's developers and they've confirmed that the game's co-op mode will be online only (for now), it will support drop-in/drop-out co-op play, and potentially having each player control their own squad of recruits, rather than one member of the squad.

Check out the video below and if you like what you see, then hop over to Desura to pick up the alpha and (eventual full game) for just $5!