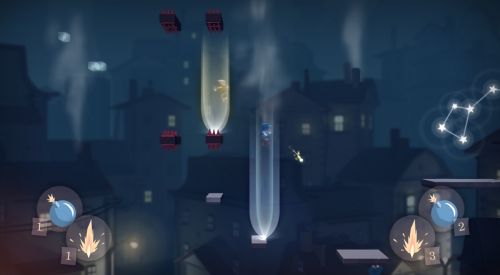 We've known that Pid, the 2.5D platformer from Might & Delight would feature 2 player local co-op since first catching wind of the game. But only the single-player mode was on display at E3, so we didn't get to see or try out co-op for ourselves. Thankfully the developers have finally published a co-op-specific video and screenshots that demonstrate just how 2-player works. The trailer features catchy music as always, though no hand-drawn animation this time around.

Kurt, the protagonist of the game is a young boy stranded on an alien planet. He looks a bit like Ness from Super Smash Bros and Mother, don't you think? I've long wondered whether or not the second player would be a nameless recolor as in Kung Fu Strike and many older games.

As it turns out, she is officially named Aubrey. That's right, a female character - perfect for co-op couples who can handle playing through a challenging platformer together. In multiplayer mode, each character gets just one beam of light to work with instead of two, so cooperation becomes key.