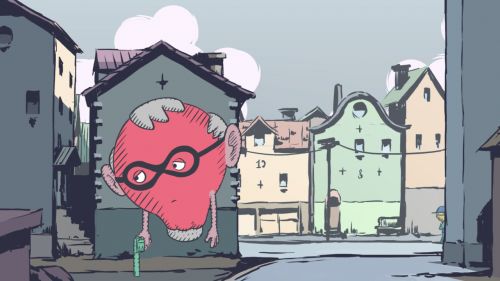 Since showcasing Pid at E3, developer Might & Delight has released a steady stream of trailers and screenshots to build up new hype. The latest trailer focuses on a screen-filling boss called The Crook, who we first glimpsed in a screenshot way back in December. Each Pid trailer does things differently from the last, though - 'The Hold-up Hustle' one actually starts with a hand-drawn cartoon before switching to actual gameplay. Don't worry, you'll still catch a new snippet of the game's wonderful soundtrack as well.

Does that look like an exciting boss battle or what? The Crook has at least three attacks at his disposal: firing a pistol directly towards the screen, dropping bombs from his balloon-like posterior, and shooting rows of bullets horizontally from both sides of the screen. Protagonist Kurt (and a friend in co-op mode) must use floating springs to bounce over The Crook and attack the weak spot on his head. That'll show him that crime doesn't pay! Might & Delight hasn't said whether or not hand-drawn animations like the one in the trailer will appear in the game itself. We'll learn all that and more in an upcoming Co-Optimus interview...