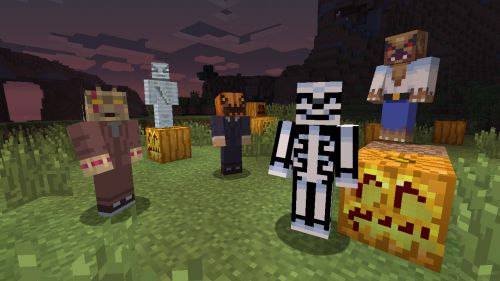 This past weekend, Co-Optimus and hundreds of other organizations teamed together to generate roughly 2 million dollars to the Children’s Miracle Network through the 2012 Extra Life fundraiser. Though slightly different in the fundraising approach than us, the developers of Minecraft: Xbox 360 Edition will join in this charity season through the new "Halloween Skin Pack" DLC, where all its proceeds will go directly to charity.

Starting tomorrow, October 26th, consumers that purchase the Minecraft "Halloween Skin Pack" will actually be donating to charity rather than their own pockets! 100% of the money used to purchase this Skin Pack will go directly to the Macmillan Cancer Support, Child's Play, SANDS Lothians and Block by Block charity organizations chosen by Mojang, 4J Studios, and Microsoft (Please visit here for more information on these charities). Like all the other Minecraft Skin Packs, this one will only cost you 160 Microsoft Points. Zombies, Skeletons, and Creepers aren’t the only things to be scared of in Minecraft. If Halloween is your favorite holiday (and you’re a Minecraft fan) then this is the ultimate Skin Pack to get. Containing a large assortment of scary costumes designed by select developers:Tequila Works, Army of Trolls, Climax, Rare, The Behemoth, Toylogic and Twisted Pixel, 55 total skins, including pumpkin heads, grim reapers, mummies, will be able available for you choose from. This is also the first chance to grab Minecraft skins with flapping capes attached to them, available only as an Avatar Marketplace clothing item at the moment.

Be sure to grab the Halloween Skin Pack while you can, as the fundraiser will only go on until November 26th (the day after Minecon ends). Once the fundraiser is gone, so will the DLC! Donate to a worthy cause and get these rare Minecraft skins while you can!