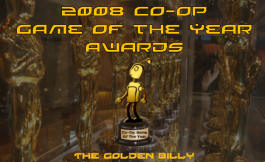 It's been a crazy and interesting year.  We launched Co-Optimus.com some 11 months ago with two goals in mind - promote co-op gaming and provide co-op gaming information.  Since that time co-op gaming has gone from a bullet point on the back of a box to the main feature promoted by publishers at press conferences.  In total there were over 100 co-op games released this year,  and that my friends is pretty damn awesome.  As the staff looked back over the list it was pretty clear what the standout titles were, but that didn't make the decision any easier for choosing our Co-Op Game of the Year.

So now I present to you our first annual Co-Op Game of the Year Awards.  Each staff member has picked their respective GOTY followed by the pick for the site.

There are so many reasons to call a game your “favorite”, and it mostly boils down to what’s available to you. Of the co-op games I’ve played this year, my all-time favorite was Tom Clancy’s Rainbow Six Vegas 2. It’s not the definitive shooter nor the definitive co-op experience, but it’s still a load of fun. Customizable face and clothing (including your own face if you choose), a great selection of weapons, and the best environment interaction I’ve ever seen make for some great co-op sessions if you have the patience for tactics. While issuing a patch to fix some community complaints, Ubisoft went the extra mile and added a mode that made versus combat less forgiving…similar to the wildly popular Hardcore modes in the Call of Duty games. I’m an amateur shooter in real life, and the gun models and animations in RSV2 are appealing, if not completely realistic; the handguns in particular draw me back to the game from time to time. There’s just something about a pistols-only co-op Terrorist Hunt that can make a rainy day so much fun, and this is one game that managed to keep the local and online co-op gamers happy: all modes can be played in splitscreen or online, and all modes contribute to your overall rank progression, so that no matter how you play…you feel like you’ve accomplished something. 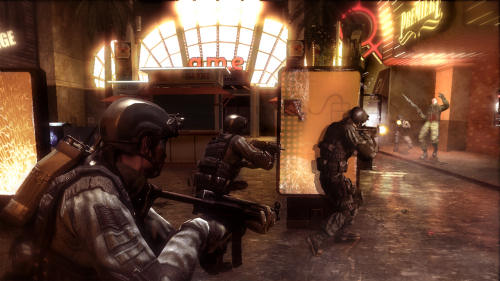 When five minutes of gameplay you get from a preview is better than anything you've played in the past few years, you know you've stumbled upon something special.  From the first time I played Left 4 Dead at PAX '08 until its release, I championed this game's qualities everywhere I could.  Upon its release, the rest of the gaming world got to experience that same magic: Valve managed to create a game where co-op was not only the star of the show, it was essential to the success of your team.  The fact that by virtue of design, players naturally learn to work together and keep each other alive instead of being funneled into certain playstyles keeps your sense of freedom intact.  It doesn't hurt that the competitive mode also requires precise teamwork.  After all, one zombie does not an apocalypse make. Properly coordinated and executed attacks?  That's just awesome.

When I saw the request for this article come in, I did my homework. I went back over all of the co-op releases over this past year and started thinking about what was a really outstanding co-op game. I tried, in other words, to think of some fantastic co-op title other than Left 4 Dead... and frankly I couldn't. The first time you and your friends face off against a Tank while simultaneously fighting off a horde of zombies amidst shouts from your teammates of "A hunter's on me, help!"… nothing else just seems to compare. For not only does Left 4 Dead put you in a situation where your very survival depends on working together, the game also wonderfully captures the feel of its source material and provides you with the opportunity to create your own zombie-horror flick narrative.

The first time I played through "No Mercy" with some friends, not all of us made it. Oh, we worked together as a group and had a few narrow escapes leading up to the finale, but that final standoff proved too much for some. When the chopper was almost there, a horde of zombies pinned down one of our comrades. Two of us ran back to attempt a rescue; the fourth just ran for the chopper.  We were overrun and literally left for dead by our teammate, but none of us were mad. We were laughing. It was exactly like what you would see in a movie; one person manages to get clear of everything while the others get torn to shreds. In what was more or less a very un-co-op moment, I knew that this was a great co-op game. For even though our teammate left us, it was only thanks to being a team that we even got that far.