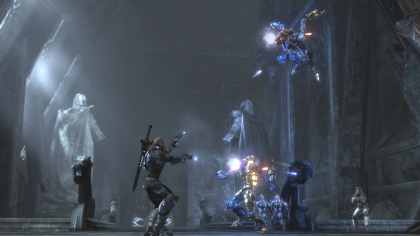 Too Human is a game that's been through a lot.  From its roots on the Playstation, moving to the Gamecube and finally ending up on Microsoft's Xbox 360 it's been a long path.  Being in development that long brings controversy, and Too Human has had its share from bad previews to engine trouble...that's graphic engine trouble.  But co-op fans can rejoice, Too Human is finally almost here!  In fact, in our exclusive interview with Silicion Knights president and lead designer of Too Human, Denis Dyack, we learn of the game's release date.  What's better?   We have all the juicy details regarding the co-op mode!

Role Playing Games lend themselves well to co-op play, so it's no surprise that Denis Dyack tells us that Too Human was designed from the ground up with co-op in mind.  There is some bad news, even though it was previously announced that Too Human would have a 4-player cooperative mode, things have been scaled back to only support 2 players.  The reason?  "The reason we did that is we looked at it, and the way the game is really frantic, and when you have a lot of guys zooming around,"  says Dyack,  "We weren't sure that would play out the best."  Disappointing news for sure, but it's good that co-op wasn't cut all together.  The really good news is that there aren't any shortcuts in the cooperative mode.   With drop in and drop out support, item trading and collecting, co-op character bonuses, and more its easy to see how this is one game that's going to be on everyone's radar.

The game has been hailed as the next step in the evolution of Diablo.  Dyack agrees.  "I think so.  We've talked about if you do something right, it should change the way people will make these kind of games in the future."  In fact, Dyack thinks Too Human is as important to console RPGs as FPS were when they were first introduced on consoles.  It's a complete interface revolution, gone is the reliance on mouse clicking, and in comes a new era of dual analog control with a unique and cinematic computer controlled camera system.

Is your interested piqued yet?  Read on for our full interview with Denis Dyack on Too Human.

If you prefer, we have a streaming audio version available right here.