LEGO Batman won't shock anyone with it's gameplay or style, but what it does offer that's new to genre (is LEGO a genre?) is worthy. Besides Batman and Robin as playable characters, players will use Villains through certain sections of the game. Each villain has their own unique super power, while Batman and Robin can change powers by using different suits. Of course the game has co-op (no online co-op though -boooooo ), and there's even some co-op vehicles. One of these was a helicopter that allowed one player to fly and the other to swing from the bottom taking out enemies. The game should drop the end of September. 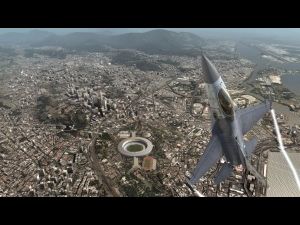 In our hands on time with the upcoming flight game from Ubisoft we didn't find a whole lot of ground breaking features. If you like games like Ace Combat you will be right at home here, though the one unique feature is a really slick camera system that makes flying and maneuvers really easy to pull off. The developers promised 4 player drop in and drop out co-op with enemy AI that will scale. The story of the game will be tightly integrated into other Tom Clancy products, so expect some cross over.

Saint's Row 2 is going to be a completely over the top open world style crime game with literally hundreds of hours of gameplay. Whether it's the game's core story, one of the 20 mini games, or any of the numerous side missions there's going to be plenty to do in the game, and it can all be done co-op. I think Saint's Row 2 is really going to set the bar for co-op play in terms of features. Of course the game will feature drop in and drop out play as well as cut scenes tailored to the individual player in co-op, but what really stands out is the co-op progression. You see, say you join a friends game and they are a few missions ahead of you. You guys work through the missions, you stop and later on you want to play the game solo. Instead of forcing the player to complete the same missions over, the game will give you the option to skip them.

Saint's Row 2 is completely over the top in both violence, dialogue and look. In fact, at one point we saw the player change into a giant hot dog costume and procede through a gritty cut scene chasing down some gangs...all while looking like a giant hot dog. It was hilarious. The game will hit store shelves on October 14th, 2008.