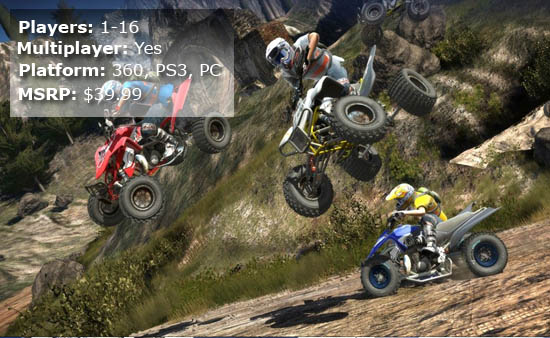 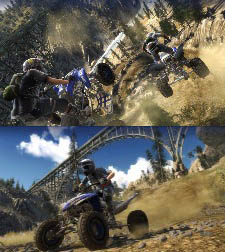 Pure is an ATV offroad arcade racing game that will remind you a lot of the earlier SSX snowboarding games.  How does Snowboarding mix with ATV Racing?

Both games feature very over the top action with big jumps and insane tricks that seemingly defy gravity. Purecertainly puts you as close to the action as possible and it is a lot of fun to play, just be ready for some semi-difficult AI challenges as you go through the World Tour mode.

The game is a bit of a surprise coming from Disney Interactive as it features some pretty impressive production values including some beautiful graphics and a licensed soundtrack with bands like Queens of the Stonage and more.  There's also some depth here as you can upgrade and customize your rider and ATV with new parts as you progress through the single player.

Pure was a nice surprise this fall, and with a budget price tag it's definitely worth checking out for racing fans.