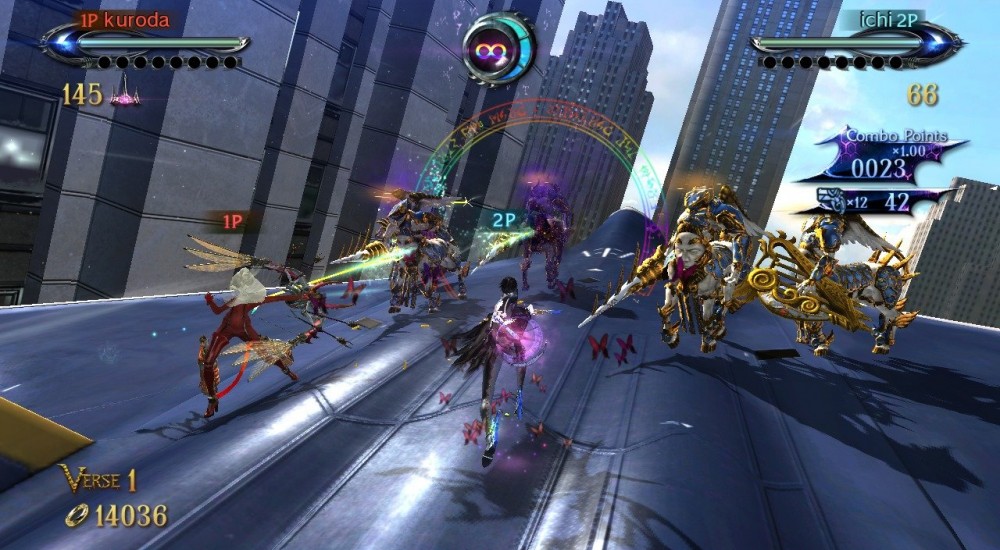 It was over a year ago that a two-player mode for Bayonetta 2 was announced. Now, more details about it have finally been revealed a couple of months before the game launches. It's co-op (mostly), but with a bit of a competitive aspect as well. The mode's called "Tag Climax," and players can either select to directly invite a friend, do random matchmaking, or play with a bot.

In Tag Climax, players will select a stage from the Verse Cards they own. They will be able to select their character as well as weapon and accessory load-out. Difficulty can be ramped up if the players desire. A higher difficulty means a higher reward of Halos (the in-game currency) at the end of the stage. Here's the catch, though - both players will have to wager an amount of Halos at the beginning of the stage. Higher difficulties sound to have a higher minimum bid. At the end of the stage, the player who has scored the most points is declared the winner, and receives a multiplier of their bet. The loser will lose some Halos. So there is a competitive aspect to the mode.

It's unclear whether a set amount of Halos will be awarded to both players at the end of the stage. Halos should be awarded, however, from the enemies the players kill together during the stage. Despite the point battle, in Tag Climax the players will be 100% working together to clear the enemies and/or bosses of the stage. Any Halos gained by players in Tag Climax will be taken back to each player's respective single player games. There they can be used to unlock techniques, accessories, and weapon variations as normal.

So there you have it - Bayonetta 2's co-op mode. Will you guys be playing it? Bayonetta 2 is due out October 14th, 2014. It will have the aforementioned 2-player co-op mode, Tag Climax.