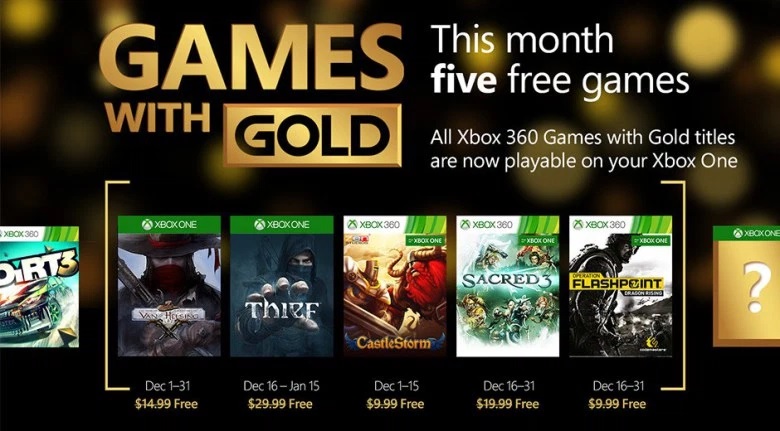 We at Co-Optimus love co-op, but you would think from looking at Microsoft's Games With Gold program that they too love a bit of co-op action.  There have been loads of co-op games downloadable over the months and December 2015 is no different, but this time there are 5 games - 4 of which are co-op!

Santa Claus must be packing his happy sack this year as the four co-op games on offer are certainly worth picking up for anyone who has Gold membership.  One owners will get the newly released console version of 4 player online co-op title, The Incredible Adventures of Van Helsing from December 1st onwards.  We may not have a review score for this version of the game, but the PC skew got a respectable 3.5. out of 5.  After the 16th, One owners will also get the solo game Thief.

For 360 players, there is a trio of co-op games on offer; Castlestorm, Sacred 3 and Operation Flashpoint: Dragon Rising.  All three games can be considered Co-Optimus cults favorites:

Castlestorm may struggle in the co-op stakes, but as a single player game it is great fun.

Sacred 3 is a secret fave of the Co-Optimus team and it will be great to see the online population increase for this very solid 2 player local, 4 player online co-op title - we even have an FAQ about the game.

Finally, Dragon Rising is part of a series that has slipped out of the gaming consciousness, but is a 4 player online co-op shooter that put the realism back into FPS.

Games With Gold has been a great way of revitalizing old and forgotten games - this month's Dungeon Siege 3 is still available and has seen a game that had no one playing online suddenly get a new lease of life.  So, why not check out all five games and play with some random people or friends?