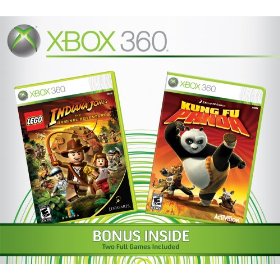 Console bundles are not hard to come by. Classic consoles almost always had a decent game packaged with them, and with three hot competitors, manufacturers are constantly trying to find ways to lure consumers into spending hard-earned cash on their product.

Of course, a high-dollar purchase isn't so simple these days. The general population is holding a little more tightly to their cash. There are only so many ways to entice a buyer, and a bundled deal is probably the most classic and proven method; even fast food joints depend on the "all-powerful bundled deal" to make true profit. (Want to sink McDonald's? Stop buying fries. They'll go belly-up in a month.)

When my Xbox 360 Pro (circa 2007) stopped displaying correctly, I utilized the 2-year replacement plan that my wife had so wisely purchased at Best Buy. Unfortunately, this meant that I had to forfeit Marvel: Ultimate Alliance and Forza Motorsport 2, as they were a part of the original purchase. Both were games that I enjoyed, albeit rarely.

Upon the realization that I would receive an upgraded HDD and gift card with my exchange, I dismissed the two games that are now bundled with the Xbox 360 (formerly Pro) and Elite models as fodder for the young'un when she is old enough to handle a controller. In the meantime, I'd whore the Gamerpoints when I was bored enough.

Lo and behold, this last week I was bored enough. Which is not to say that there wasn't something better to do...but I needed a casual, quick game that wouldn't frustrate me too badly. So I popped in Kung Fu Panda and LEGO Indiana Jones, two games that stayed well away from my hype radar, yet scored solid 75 and 77 on Metacritic (tip: you can find the Metacritic links for each game on their respective Co-Optimus page).

While neither title includes any kind of online mode, both have offline co-op. LEGO Indy features drop-in/drop-out same-screen campaign gameplay for two players, and Kung Fu Panda has its own "Horde Mode" for up to four players...also a same-screen situation. Both games are what I call "stupid fun", which means that playing them is entertaining, and playing with a spouse or child is even more so. Now, the new Red Elite Xbox 360 is available for pre-order, and comes with a copy of Resident Evil 5, which is -- you guessed it -- a co-op title (you probably didn't have to guess, thanks to Co-Optimus' coverage, but you get the drift). Again, Microsoft adds market value to their console by equipping a co-op game that can be played side-by-side with a friend.

It wouldn't be too hard to pass this off as a coincidence; and as bundles and special deals emerge, the trend may change. That said: it's never a bad thing when nearly every Xbox 360 purchased from Christmas 2008 through Spring 2009 -- or beyond -- comes with at least one co-op game. Gamers young and old are being subjected to modes that communities like ours often require.

The Playstation 3 isn't opposed to co-op bundles, either, as can be seen in the expired LittleBigPlanet and current Grand Theft Auto IV deals. While these are actually just discounted games bundled with the console at full price, they're a good start.

As I mentioned before: my first instinct when picking up a replacement console was to write off the games that were included, and in fact I had planned to trade them in at GameStop. After an hour with each, though, I am happy to say that while they're not my favorite games -- and not even in my personal top ten -- they will be played again. The likelihood of my wife and child playing with me in the future is one that encourages me to keep the games, and that is what co-op is all about.

Bravo, Microsoft! Be it blunder or intelligent marketing, this week was one of discovery and hidden treasure. Enjoy the fruits of our labor, Co-Optimers: co-op just may dominate 2009.