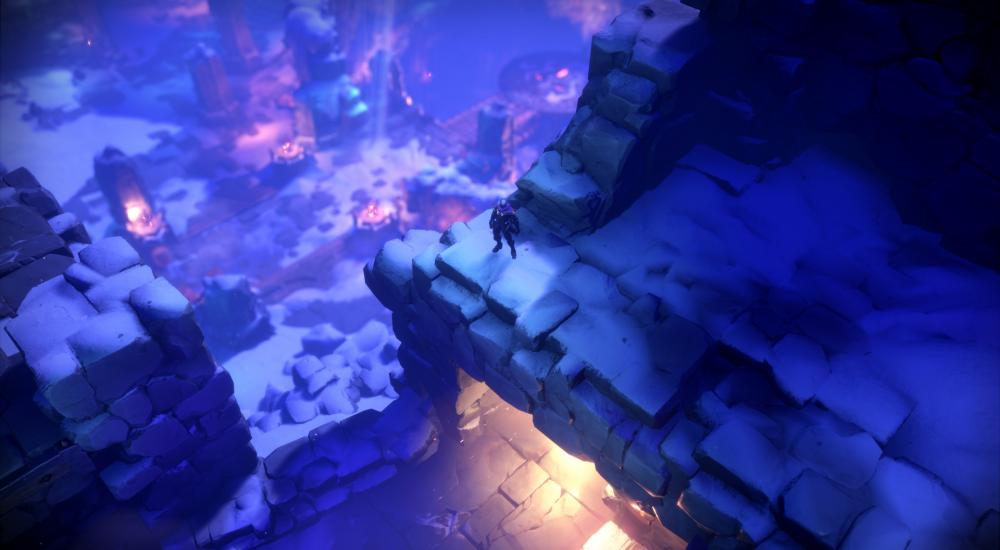 The Darksiders franchise got a new entry last week on the PC (console version is coming February 2020) with Darksiders: Genesis, an isometric, twin-stick shooter-ish, action/adventure game. While the gameplay has changed a bit from the previous third-person action titles, there's a lot that's familiar and the new format works. Best of all, you can play with a buddy online or on the couch!

Genesis takes place sometime before the events of the first game and introduces the fourth Horsemen, Strife, a gun-wielding wise-cracker. The general setup is that Strife and his brother War (protagonist of the first Darksiders game) are tasked by the enigmatic Charred Council to help "maintain the balance" by figuring out what ole Lucifer is up to and why he's empowering some demons. That's tipping the scales, Luci! So Strife and War set out to talk to Samael and see what he knows; thus, the stage is set and you'll progress through 16 more levels to unravel the mysteries.

The first level of the game acts as a tutorial to the general action/gameplay, though things do change up some as you progress and earn new gear, abilities, and more. Strife is your fairly straightforward twin-stick shooter character (i.e., use one stick to move, another to aim, and buttons to shoot), while War holds true to his melee combo roots. It's an interesting mix as there are definitely cases where, if playing solo, you'll want to get close and mash out those combos vs. maintaining some distance and firing from afar.

Neither character feels like they're overpowered (Strife's guns generally do a little less damage than War's melee attacks), and both require a different degree of skill to play. War has a parry that can completely negate incoming damage if it's timed correctly, so you'll have to pay very close attention to the enemies and look for the little flash that indicates when they're about to attack. Strife has a dodge that can get him away from danger and he also has a melee attack that will slow enemies down while simultaneously moving him away, giving you more time to land some shots. There are other factors to consider, such as Strife getting different gun ammo/bullets and War getting different sword enhancements, different Wrath abilities, and different gear, but on the whole, Strife and War are equally fun to play if you're going it alone.

Things do change up a bit when playing with a friend. One player controls Strife while the other controls War, though you can switch if you or your buddy would prefer to play one or the other. Having access to both Horsemen at the same time would make some combat encounters trivial and some puzzles boring for one player, so when playing cooperatively you'll face more enemies, as well as tougher ones, and some of the puzzles are changed to provide both players with something to do. Finally, if one player loses all their health, they can be revived by the other one (in single-player, you'll swap to the surviving Horseman and there's a 20 second timer until the other one revives). Outside of that, the only other differences come from playing online co-op vs couch co-op. For couch co-op, all progress is saved to player one's game. For online co-op, each player uses their save data from their own game - including all abilities and gear they've unlocked - access to missions is limited to the player that has progressed the least, and souls (currency used to buy upgrades) is split between both characters.

There's a lot more I could go into about the game - the upgrade mechanic (creature cores) kind of allow for "builds," the levels vary in size but always feel huge, the banter between Strife and War is, on the whole, good - but honestly, if you like what you see in the first 15 minutes of the video, I wholly recommend picking it up. It is the Darksiders game I didn't know I want, and I'm so glad that Airship Syndicate has found a way to "break the mold," so to speak, and incorporate co-op in a meaningful way.

Darksiders: Genesis is available now on PC and Google Stadia. If you prefer to play on the PlayStation 4, Xbox One, or Nintendo Switch, you'll have to wait until February 14, 2020. Two player couch co-op or two player online co-op is supported throughout the campaign.