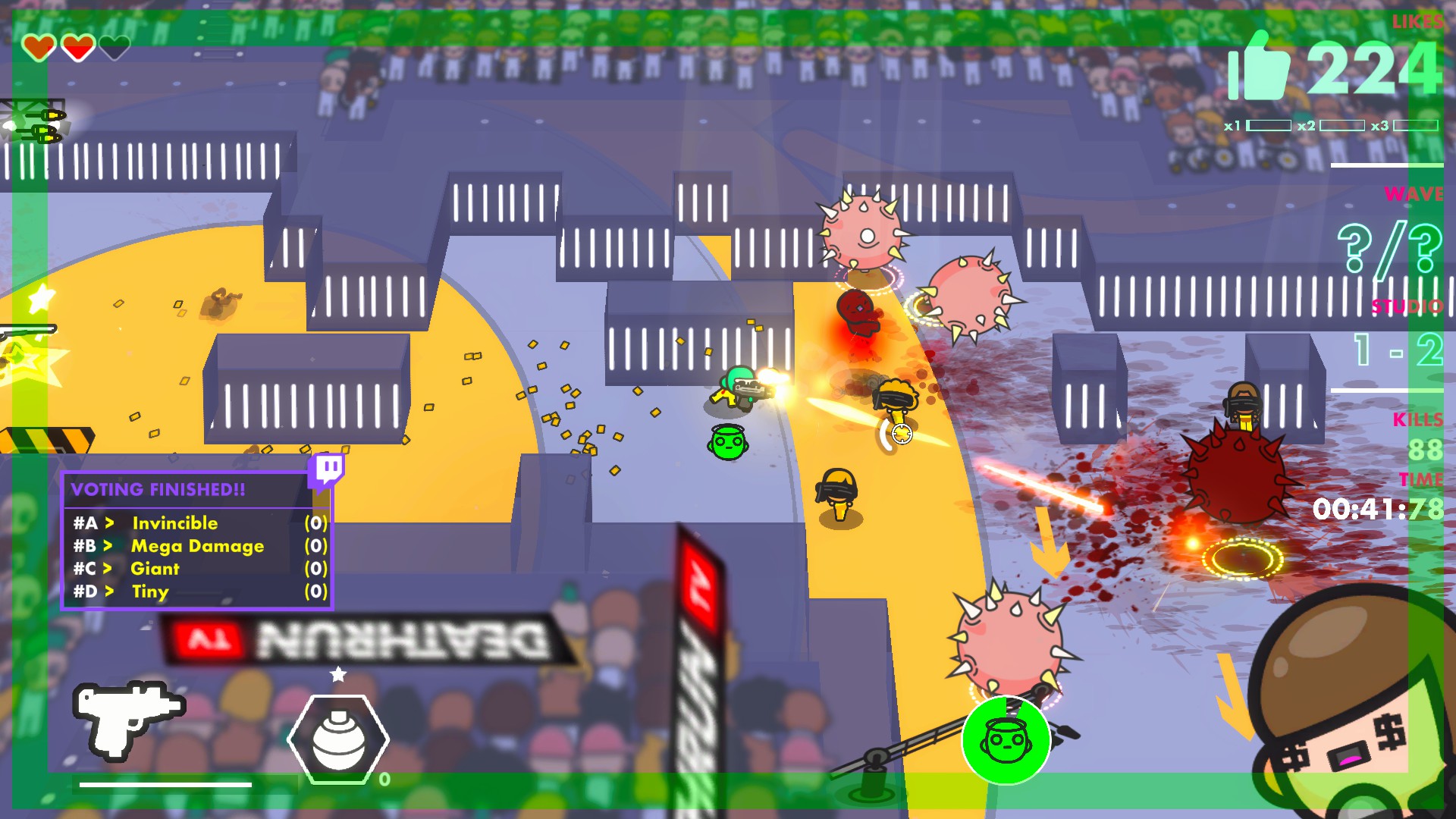 Almost exactly a year ago, we wrote about an in-development game called DeathRun TV from Laser Dog and Merge Games. DeathRun is a twin-stick shooter/Roguelike that takes obvious inspiration from The Running Man and, just maybe, Smash TV. Fast-forwarding to now, DeathRun TV has finally launched on Steam and Switch, but there's a catch: the co-op mode that was initially announced is nowhere to be found. Still, even as a single-player-only game, DeathRun TV is pretty solid and compelling.

The premise of DeathRun TV is simple. Play as a contestant in a deadly game show, causing as much mayhem as possible in front of a live studio audience. Contestants' primary goal is to receive as many likes as possible. The more popular they get, the more powerful they become. Specifically, fame can be spent on the player's choice of mutations, boosting movement speed, fame gain, and more. If you die, you'll just be resurrected for another round on the show. One new element that we didn't notice in last year's demo is that of rescuing hostages. In the final game, blindfolded hostages roam around most of DeathRun's levels. Touching a hostage will get him or her to follow your character. The goal is to safely lead the hostage(s) to a drop-off point. Easier said than done, though; enemies will make quick work of any civilian they come across. The hostage-rescuing mechanic add a frustrating but fun element to the game, and I don't just say that as a fan of Shinobi and Moonwalker!

We asked Merge games whether co-op would be added to DeathRun TV in a future update, and we were told:

Unfortunately not, local multiplayer was something initially toyed with in the very early stages but wasn’t something we implemented in any playable builds. It’s not something we’re looking to add at the moment, but with enough demand from players who knows! The scope of a game sometimes changes prior to release. For my part, I would say that while the initial promise of 4-player local co-op might have proved too challenging or expensive to the 2-person studio that developed the game, scaling down to just 2-player local co-op would have been a fine compromise. Co-op really adds a significant amount of value and enjoyment to twin-stick shooters and shoot 'em ups, as our readers would surely agree. That's why I'd encourage everyone to support the game with a purchase but also tweet @LaserDogGames and let them know how much better DeathRun TV would be with co-op.

DeathRun TV might may not be the co-op Roguelike we were once promised, but it is still a really unique and addictive game. The atmosphere really captures that dystopian game show feeling that so many of us loved about Smash TV and The Running Man. The pace of the game, the mechanics, and the unlocking system are all quite good. Gamers can even turn down the screen shake that annoyed me in last year's demo, thank goodness! If you've got the steel for a deadly game show with lots of shootin', give DeathRun TV a try.

DeathRun TV sells for $14.99 on Switch and Steam. Xbox and PlayStation versions are planned for the future. The game's soundtrack is also available for approximately $10 on Bandcamp.

A Steam review code was provided by the publisher.