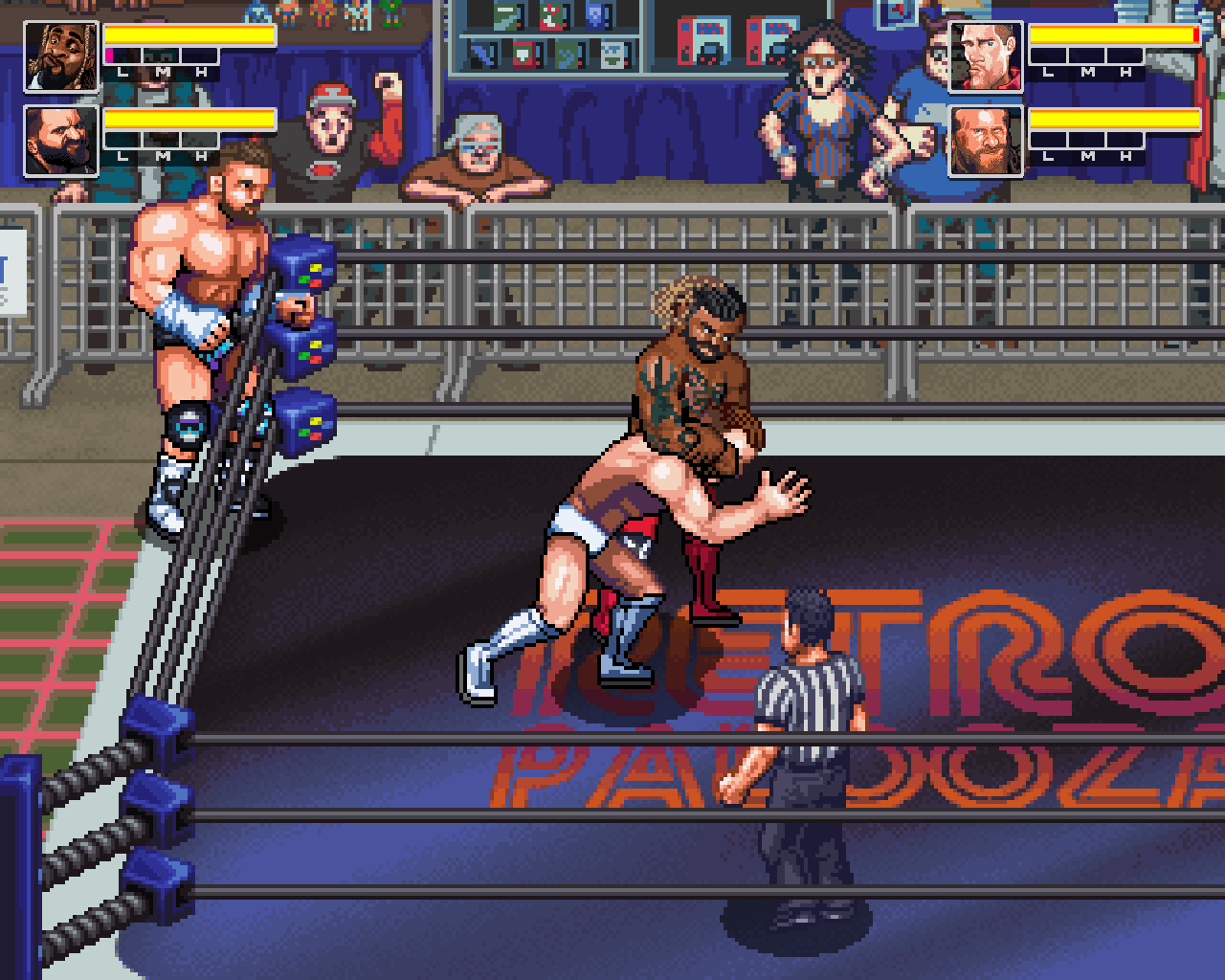 Okay, so we've been neck-deep in TMNT: Shredder's Revenge for the past few weeks, causing us to miss a few of the latest iiRcade announcements. iiRcade, as all the cool kids know, is a home arcade platform for which users can buy individual games. Some of those games include RetroMania Wrestling, which just got a free update; the recently released Donut Dodo, a single-player game that plays just like a lost arcade classic; and several existing classics like Strikers 1945, The Ninja Kids, and FixEight that now support online co-op. RetroMania Wrestling is a modern spiritual successor the classic arcade game, WWF WrestleFest. It offers several modes of play, including Story, 10 Pounds of Gold, Retro Rumble, and Versus. While most of the modes aren't cooperative, the Versus Mode does allow two players to play co-op against the CPU in tag team matches.

It's a fun game, and this update adds to the fun with:

Who is Chris Bey? He's a wrestler with Impact Wrestling. iiRcade also makes a RetroMania Wrestling-themed cabinet that sells for $599 at Best Buy.

Every Friday, iiRcade adds online multiplayer to some of the retro games in its library. Some of the previous games to get online co-op include: In the Hunt, Fancy World, Warrior Blade, Cybattler, Knuckle Bash, Dogyuun, and Out Zone.

Several more titles have received the online co-op treatment in recent weeks. Here are some quick details and co-op screenshots: FixEight (1992): A top-down run-and-gun shooter with multiple playable characters, FixEight is a spiritual successor to Out Zone. Price: $9.99 Strikers 1945 (1995): A vertically-scrolling shoot 'em up from Psikyo featuring selectable airplanes and bosses that often transform into mechs. Price: $9.99 Tengai (1996): Better known by the much better title Sengoku Blade, "Tengai" is a side-scrolling shoot 'em up with a mystical theme and selectable characters that include one very busty shrine maiden. Price: $9.99 Last and certainly not least, Donut Dodo is a single-player retro-style game from Pixel Games. The game stars a chef who must rescue dozens of donuts from an out-of-control dodo while avoiding unfriendly flames, killer toilets, and other hazards.

With its multiple single-screen levels, climbable ladders and chains, and titular giant animal, Donut Dodo is clearly inspired by Donkey Kong and Donkey Kong, Jr. This one really captures the fun of those classic arcade games, making it a terrific modern release for iiRcade. Fans of the era won't want to miss it!

Donut Dodo sells for $4.99 on iiRcade and Steam.