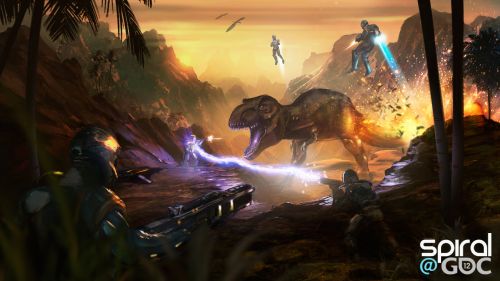 Humans versus dinosaurs co-op games are almost as rare as real, live dinosaurs. There's Capcom's arcade classic Cadillacs and Dinosaurs and the most recent, slightly disappointing Turok, and that's it. That will change next month when indie developer Spiral Game Studios releases Orion: Dino Beatdown for PC. Up to 5 human players will be able to take on hoardes of terrible lizards in this fast-paced first-person shooter. Did I mention our side gets jetpacks and vehicles too?

Dino Beatdown is a teaser/spin-off of the still-under-development Orion: Prelude. While Prelude has been announced for XBLA, PSN, Steam, and Onlive, Beatdown is only coming to Steam and Onlive. With a low price ($9.99), an awesome theme, a cool feature list, and the promise of free future updates, Orion: Dino Beatdown could be quite a hit when it debuts in March. Co-Optimus will keep you posted.