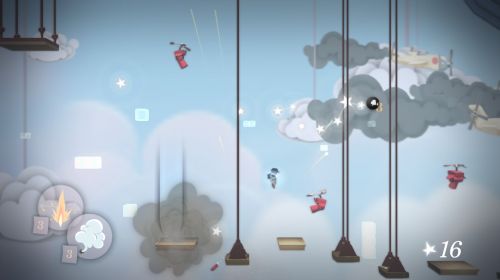 Pid was announced way back in 2011, but it didn't appear on many players' radars (including my own) until E3. After seeing the game in action and speaking to the developers at Might & Delight (many of whom worked on Bionic Commando Rearmed), it quickly became clear that Pid is the 2.5D platformer to watch this year. Lovely BCR-esque graphics, unique gameplay mechanics (you throw beams of light that thrust your character through the air), challenging old-school design, and 2-player local co-op could all help make this game a new classic. We'll find out on Halloween, when Pid launches on both XBLA and Steam. PSN users will have to wait a bit longer, as that version doesn't have a release date yet - a reverse Retro City Rampage situation.

The developers have also released a new trailer showcasing the differences between Pid's Normal and Hard modes:

Looks like Hard mode will give challenge-hungry gamers something meaty to chew on. I'm one of the mild-tempered players who didn't get much enjoyment out of Bionic Commando Rearmed's Super Hard difficulty setting. Will Pid prove too tough for me on Hard? Only time will tell.

Pid will support 2-player local co-op when it arrives on October 31. We'll have a full co-op review shortly thereafter!