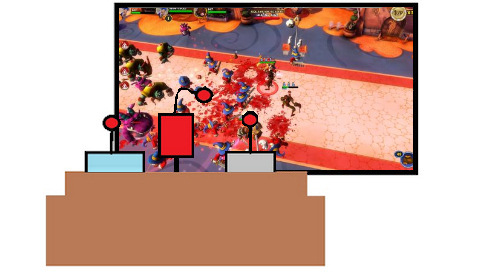 You may have noticed a bit of DungeonLand around Co-Optimus right now.  There's a few of us on staff actually playing the game, which we found to be a bit like Smash TV.  Needless to say the difficulty helps promote the co-op experience.  For those of us that don't want to take a ride through a bloody theme park, there's plenty of other stuff to play like Dark Souls.

Andrew "Cubninja" Gaskill (@cubninja) - "I'll be wrapping up Dead Space 2, and if I have time I'll be offering my assistance to fellow SunBros in Dark Souls."

Mike "Pheriannath" Katsufrakis (@Pheriannath) -  "Dungeonland, Dark Souls, Dragon's Dogma, and it looks like I'll be busting out the WiiU to play NintendoLand with some friends."

Marc "DjinniMan" Allie (@DjinniMan) - "Probably some board and card games plus a little Skylanders for us."

Jason "OrigamiPanther" Love (@JLove55) - "I'll be recovering from whatever illness has taken me and possibly playing some Dark Souls and some Dawnstar."

Sam "Samoza" Tyler (@reelsamtyler) - "A weekend at a pals is coming up and he just bought LEGO Lord of The Rings.  What does that mean?  Yep, beer and football! (and maybe some LEGO)"

Locke Vincent (@LockeVincent) - "Going to try and fix my PC so I can get back into Devil May Cry and Dungeonland. "

Tally "xelissa" Callahan - "Ni no Kuni all the way!"

Chris "The Lemko" Metz (@The_Lemko) - "Trying to overcome my current sickness, but I might work on getting character specific achievements in Borderlands 2 (Salvador and Zero are calling me)."