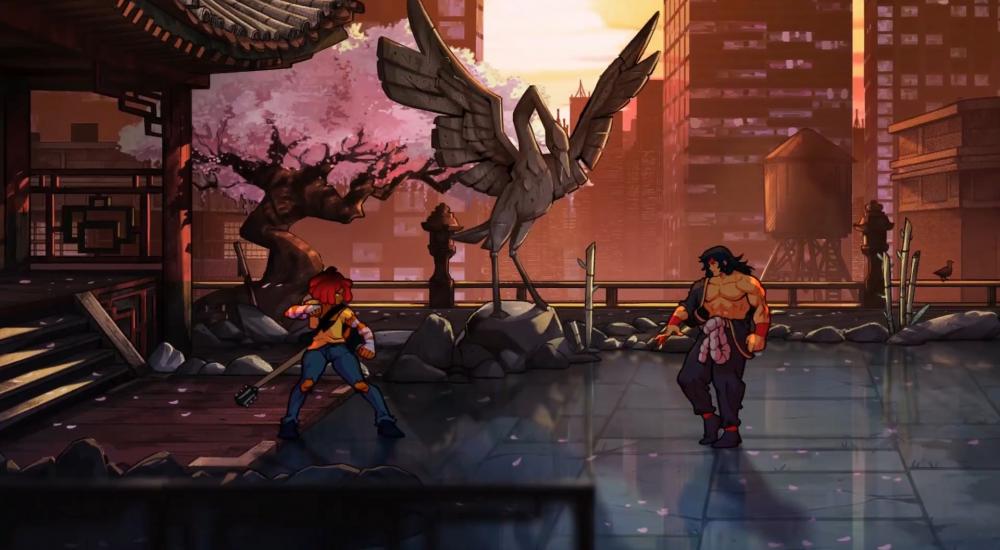 At this year's Gamescom, Lizardcube, Guard Crush Games, and Dotemu showed off some new footage of the forthcoming Streets of Rage 4, including a look at a new character, Cherry Hunter. The trailer also included a little bonus at the very end: the newest entry in the Streets of Rage franchise will be released on PC, Nintendo Switch, Xbox One, and PlayStation 4.

Streets of Rage 4 coming to every modern gaming platform seemed like an inevitable thing to happen. I mean, in 2019, how could you release a new entry in a classic series on just one or two consoles? That's leaving money on the table! (pretty sure business people still say that.)

Anyways, platform reveals aside, the more important thing to discuss here is the reveal of a new playable character. Cherry Hunter is the daughter of Adam Hunter from the original Streets of Rage. Rather than be a cop like her dad, Cherry opted to get into the music scene and rock out. Here's her official character description from Dotemu:

Trained by her father and Axel, Cherry learned self-defense from a young age. Her interest in following in her father’s footsteps and becoming a cop soon faded out, replaced by her love of music. Nowadays, she plays with her electro progressive rock band in some of the most dangerous places in Wood Oak City. She may look young but make no mistake - she is a seasoned veteran of kicking ass and taking names.

In the gameplay footage, you can see her using her guitar to not only strike some powerful power chords, but also pulling off some mighty knee slides.

This is the third character revealed so far (Axel and Blaze being the first two), but I have a feeling we'll be getting at least one more. If you look at the thumbnail for the video, you can see an outline for another character that appears to have some kind of mechanical/power arm thing. Also, if you look at that same image at the end of the video, you can just make out what appears to be a similar kind of outline for another character behind Cherry and the mysterious 4th character.

Still no word on a release date, or how many players the title will support for co-op and if it'll have online or not (two player couch co-op seems like a safe bet, for now). Hopefully we'll get some of those details when the next character is revealed.