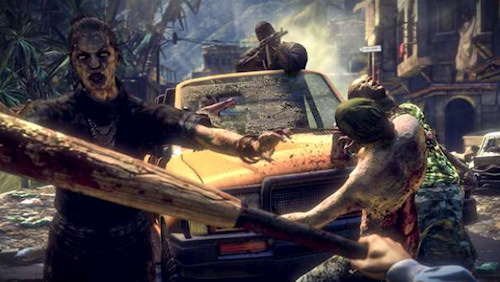 This Week in Co-Op makes its return as Nick and Jason take to the island of Banoi only to discover it's become over run with the undead.  Like any good hollywood movie, what follows is an account of their epic adventure through Dead Island.

Playing through Dead Island with Nick, I was reminded of the recent interview we did with Final Form Games. Specifically, I was reminded of the discussion Mike and I started during the interview about story, which we finished later over a few beers. When asked what was their favorite co-op experience, two out of the three developers from Final Form Games responded with experiences they had playing through Left 4 Dead with friends. These were more than just experiences, though, they were stories; the kinds of stories we pay to see in TVs, movies, and comics. For as many games out there attempt to achieve the level of storytelling found in these venues, games like Left 4 Dead, and now Dead Island, achieve this by letting players create the story themselves.

In one particular mission, Nick and I found ourselves in need of getting the last mechanic on the zombie infested Banoi island to turn our recently acquired armored truck into even more of a rolling death machine. On the way there, we felt safe and secure inside our truck; laughing as we ran over zombie after zombie along the road, occasionally throwing it into reverse to run over them again. When we arrived at the mechanic’s he told us that he’d be able to get the work done, but we’d have to protect the shop while he did it. “No problem,” we confidently thought, “they’re not so tough.” We headed out into the heat of Banoi, and prepared ourselves for the ensuing assault.

The first wave came with the howls of the undead, but they quickly fell to my machete and Nick’s club. The next wave was quickly dispatched in the same fashion, but the next caught us off guard. While I was dispatching a couple of the brain-hungry walking corpses, a few were beating Nick to a bloody pulp and by the time I reached him, it was too late. He revived a few seconds later, but the zombies that had taken him down had turned on me and done the same. We had had enough. Nick switched to a bladed weapon and we both began a bloody massacre. The final one came at me and I kicked it back. As it let out a howl, Nick and I both stepped up to it and sliced. The camera slowed as my blade took off its head, and Nick’s removed an arm; a swathe of blood flew out as the headless and now armless corpse slowly fell to the ground. The mechanic had finished his work and called us inside. All I could picture, though, was two grimly determined warriors covered in blood and standing over the fresh corpses they had made. But while some things in a game immerse you so much, you forget you are actually in a game - instead caught up in a moment - there are other times when it’s equally as entertaining to break the rules of reality, and get a little crazy.

That’s the truly great thing about Dead Island, it allows us this freedom to do what we want. Whether we drive through a pack of zombies with our co-op partner in the back to laugh at the physics of their limp bodies flying through the game world, or we hack the limbs off of zombies and play with them like a cat plays with a fly - Dead Island makes it incredibly easy to entertain yourself.

So while some stories are be the tales of battle grizzled veterans of how they banded together to conquer the undead against seemingly impossible odds, others may be how your team of four Sam B’s sat around kicking a zombie corpse like a soccer ball for 15 minutes.