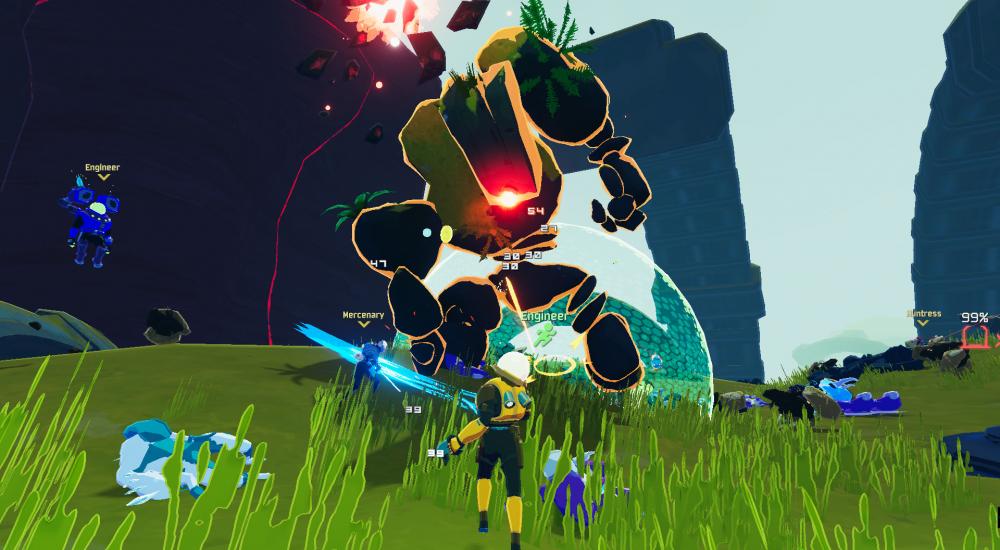 In a surprise reveal last Thursday at PAX East, Hopoo Games and Gearbox announced that Risk of Rain 2 was now available to play via Steam Early Access. As the original game was a particular favorite for our staff, we couldn't wait to hop in and check out the sequel!

If you didn't play the first Risk of Rain (and if you're a fan of rogue-likes and action-platformers, you really should), here's a quick breakdown of the gameplay. After selecting a character (there's only one to start and others are unlocked via certain in-game achievements) and an overall difficulty level, you'll start off in a world with the sole objective of finding the teleporter that will take you to the next world. You can try and track it down right away, or spend a little bit of time killing foes to earn gold that will let you open the chests that are scattered all about. These chests contain power-ups (such as faster attack speed, faster health regen outside of combat, causing enemies to bleed on hit, etc.) that will help you make it through. Getting repeats of a power-up is useful as it increases the effectiveness of it, i.e., your attack speed will get faster with multiples of that power-up. You'll always need a few power-ups before activating the teleporter as once you do, things go off. Not only will you have to stand within a sphere for a set amount of time in order to charge the teleporter, you'll also have to contend with way more enemies and a boss that you have to kill. Rinse and repeat this process for each world until you can find your way to the end.

Alongside all of that, there is a timer constantly running at the top of the screen. After a certain amount of time passes (the exact amount varies based on the overall difficulty level selected), things get tougher. More of the regular enemies will spawn as will the elite types; basically foes with more health and some special abilities. Eventually, you'll start to see bosses spawning alongside regular enemies, which is You have to strike a balance between progressing through the different worlds and getting power-ups that increase your chances of survival. It is great "push/pull" sort of gameplay and it is very addicting (i.e., "just one more run, just one more run").

I was initially weary of the shift from 2D platformer to 3D, third-person shooter, but after 2 minutes of playtime, those worries were quickly assuaged. Hopoo has done a great job of transitioning the rogue-like to the 3D space, and made an already hectic/chaotic game feel even more stressful when threats can come at you outside of your field of view. This doesn't mean that the game is perfect (the teleporter blending into the background isn't great), but this is a very solid start and the game will undoubtedly only get better from here.

On the co-op side of things, here are the key things to keep in mind:

I'm very eager to put even more time into Risk of Rain 2 and see how it continues to develop/improve between now and version 1.0. It is only available on Steam via Early Access, but the partnership with Gearbox means it'll eventually head to other platforms as well. Four player online co-op is supported.